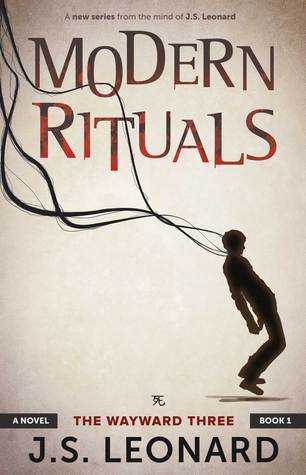 If you loved Cabin in the Woods, or if you’re a fan of Battle Royale, then you need to stop everything and pick up Modern Rituals, the first novel of the ‘Wayward Three’ trilogy by J. S. Leonard. Thrilling, exciting, terrifying, Modern Rituals was impossible to put down, and I’m certain that this is the beginning of something great.

The Goodreads’ summary has this to say:

Manhattan, NY: The E-Train slams into James Bixby, a strapping young artist on the rise, after a life-saving rescue attempt goes awry. Belfast, Ireland: A bullet severs Olivia Young’s spinal cord while she defends a doctor colleague—the second bullet pierces her heart.
Then they awaken—unharmed.
“Selected” and thrust into a deadly ritual, James’ and Olivia’s lives—along with the lives of five others—will decide humanity’s fate: surrender to the old Gods’ rule or live on in blissful ignorance. Follow their frantic struggle as Magnus—a secret organization of enormous reach and scientific prowess—directs the ritual to its gruesome end.

The novel broke any expectation I had of it from the get-go, by simply being utterly unpredictable. As soon as it seemed to linger on a certain trope, it would switch up, change to something entirely new, leaving me clutching the book, thinking what on earth just happened? From the mysterious prologue, it then seemed to move into a superhero novel; but before anything could happen, we’re thrust into Battle Royale, followed swiftly by Cabin in the Woods, along with The Ring, maybe with a hint of Hunger Games (but just a hint), before finally it twists out of control, throwing in surprises you never could have anticipated, and suddenly defies all comparison.

I love that the author managed to give us insight into the “behind the scenes” of the situation, without this making the situation feel helpless. We learn hints about what Magnus – the corporation behind it all – has in store, slowly letting us see more and more of how far its control really goes; the influence they have is vast, and will most certainly be tackled in the next books of the trilogy… I just can’t wait.

The characters themselves are impressive, as they break away from the box they’ve been put in, even the role thrust upon them by the ones pulling the strings. James and Olivia quickly become more than just ‘the heroic man’ and the ‘innocent woman’ that they are expected to be. Both are smart, creative, resourceful in the face of danger, and can hold their own when horrifying things come their way. Then with the addition of Trevor to the ‘main cast’, so to speak,  you can be sure that things are going to get interesting.

With twists that will leave you begging for more, this novel is one you’re going to need to read sitting down, because you won’t be able to move for a few hours. Modern Rituals may be one of the most thrilling novels you’re going to read in a long time.

Meanwhile, I’m going to set a countdown for when the sequel comes out.