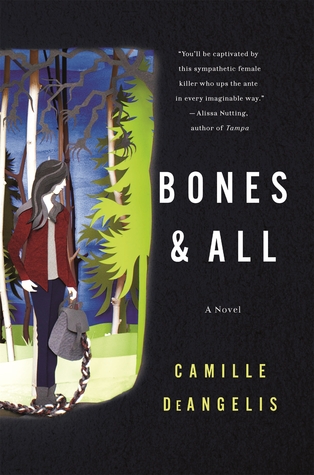 A Cannibal coming of age story – yes, you read that right. This is possibly the most bizarre young adult novel I have read in ages, full of life questions and gore, road trips and horror, and cannibals of all walks of life. It is, all in all, messed up – but I loved every second of it.

Since she was a baby, Maren has had what you might call “an issue” with affection. Anytime someone cares for her too much, she can’t seem to stop herself from eating them. Abandoned by her mother at the age of 16, Maren goes looking for the father she has never known, but finds more than she bargained for along the way.

Faced with love, fellow eaters, and enemies for the first time in her life, Maren realizes she isn’t just looking for her father, she is looking for herself. The real question is, will she like the girl she finds?

Imagine that there are people – they look just like you or me – who have an affliction, an addiction, that they keep hidden from the world. That there are people who need to eat human flesh, to devour an entire being, grinding the bones and all. This last bit makes things easier, since there is such little left of the body to actually find once someone notices they’re missing in the first place. These people are careful,under the radar, so much so that some don’t even know that others exist.

Maren is one of those people. It started with the babysitter when she was a baby, and now, it’s every boy who gets ever so slightly too close. She simply cannot stop herself from eating them whole. Her mother has been caring for her, moving from state to state, until one day, she decides it’s too much, and leaves. Now Maren needs to find her own way int he world – and figure out her place in it. She’s one of those characters you just have to root for, even if their principles are a little out of whack: she’s young, confused, but smart and independent, able to care for herself and reach her own goals.

I will warn you all right now: this novel is not for the faint of heart. People die, and it is presented as natural, light, an event which happens. I found myself reading along and realizing that the person we were just talking to was now in some character’s stomach. It neither glorifies nor vilifies the process, it simply is. And many could find this troubling. If you don’t find it at least disturbing, I’ll be worried we’re not reading the same book. One of the characters is particularly weird, and grows more and more unnerving as the book progresses, to the point of making you uncomfortable. Just goes to show you the extent of the character depth.

But DO NOT let this make you think that I did not enjoy this book. Gosh, you have no idea how much I loved it. Bones and All is a book you’re going to want to share and read over and over again. It’s unique in that it presents the messed up period of a teenager’s life were questions are asked and the search for self truly begins, while at the same time being a story about a messed up person with a really messed up problem. Everything in Maren’s life is a mess, but she’s gotten pretty good at cleaning those up, or hiding most of them. Just because she eats people doesn’t necessarily make her a bad person… does it? That’s a question for the reader to answer – and Maren too.

The ending I’m a little torn about. Does it feel rushed, both in a sense that the writer wanted it done, and that the book just wanted to reach its end? A little. Possibly. But it left me feel shivers, yearning for more, while simultaneously  wondering not only what the heck just happened, but why.

Yes, it’s odd. Bizarre. Sometimes the coincidences are just too huge, too unbelievable, but then again, you’re reading a book about teenage cannibals. But it flows effortlessly, the writing skillful and beautiful, something you’re not sure to forget. You’ll eat it up.