When I saw that this book was available, I jumped at it. Margaret Atwood? Heck yes! I was super excited to get to reading, and had no idea what to expect. And now, after having finished the novel, I still have no idea how to describe this book. It was pretty amazing, while being strange, unpredictable, and oh so weird. The premise itself is bizarre to begin with, and it just goes on from there. 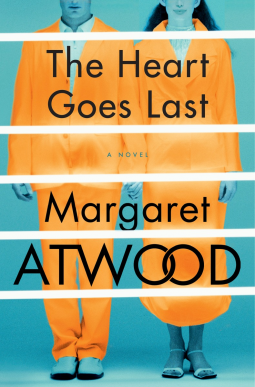 (from the book, since I honestly have no idea how to summarize this novel without giving anything away.)

Stan and Charmaine are a married couple trying to stay afloat in the midst of an economic and social collapse. Job loss has forced them to live in their car, leaving them vulnerable to roving gangs. They desperately need to turn their situation around—and fast. The Positron Project in the town of Consilience seems to be the answer to their prayers. No one is unemployed and everyone gets a comfortable, clean house to live in . . . for six months out of the year. On alternating months, residents of Consilience must leave their homes and function as inmates in the Positron prison system. Once their month of service in the prison is completed, they can return to their “civilian” homes.
At first, this doesn’t seem like too much of a sacrifice to make in order to have a roof over one’s head and food to eat. But when Charmaine becomes romantically involved with the man who lives in their house during the months when she and Stan are in the prison, a series of troubling events unfolds, putting Stan’s life in danger. With each passing day, Positron looks less like a prayer answered and more like a chilling prophecy fulfilled.

From some online research, I’ve gathered that this novel is a reworking of Atwood’s epub series, “I’m Starved for You” , Part of the Positron series. Having not read this series myself, I can’t really comment on how it’s been altered: the changes the author has made, the things she has added or taken away, I don’t know. However, I do know that fans of the series must be pretty excited about this new release.

Set in a dystopian near-future, The Heart Goes Last  touches on the idea of obsession, power, and love. If this makes you uncomfortable, then I’m sorry to say this novel will have your skin crawling. There are characters inside so overcome with desire for others that they completely let go of rationality and step into the realm of science fiction. We have Stan’s obsession with Jasmine, the woman he believes is his alternate, and who appears to be the answer to his sexual fantasies. There’s Ed, and his obsession with Charmaine, going far beyond what is healthy. And then there’s the secret of Positron itself, and what it has to offer the outside world: a cash cow of Possibilibots (incredibly lifelike sexbots) and an operation that could give any person with the right price exactly what they’ve always wanted…

Atwood manages to make you cringe so many times in this novel. While the main plot is strange, in a very bizarre world, full of the oddest twists and surprises, it somehow comes off as comedic, with the ending like something out of Midsummer Night’s Dream. However, it is still incredibly dark. These things cannot be legal, and at many points creeped me out. Stalking, spying, lifelike sexbots – the lengths some people will go to get what, or who, they want, astounds me.

It’s odd how much I liked this book without liking many of the characters. Stan came off first as a bit of a creeper, but his character seemed kind of empty towards the end, which is understandable considering what he’s been through. Charmaine seemed at times resourceful and smart, but other times came off as a bit of an airhead. While I loved the plot of the novel, sometimes the wandering thoughts of our two protagonists slowed down the pace too much for me. I found that their idea repeated themselves a lot without much development, to the point where it made the novel feel slightly dull. It really picks up once Stan is told the truth and thrown out of the status quo.

The novel accelerates towards the end, or at least, increases in weirdness until the ending. The end itself seems still a little strange for me: as I said before, it reminds me a lot of “A Midsummer Night’s Dream” in the way that everything comes together and love is set right – even if in some cases that love may be a little strange. But here I am, sitting and thinking about this novel and its bizarre ending, long after the book has been put down. It’s stuck with me.

I do really recommend this book, though. It’s a dark comedy very much in synch with what Atwood has written before. It’s strange, yes, but also thought provoking and memorable. Publishing date is expected to be September 29th.