I reviewed this book on Saturday on our Tumblr, but the truth is I liked it so freaking much that I had to put it on our main blog. This book is fantastic, and I still can’t put my finger on the reason why: it just was. It was heartfelt, truthful, and the first book to bring me to tears this year. 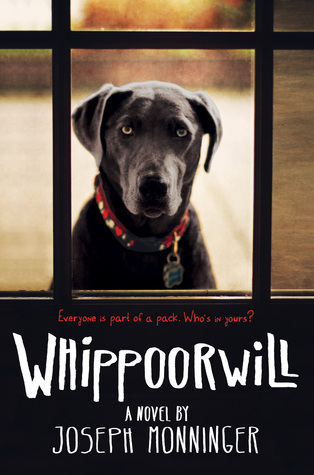 Sixteen-year-old Clair Taylor has neighbors who are what locals call whippoorwills, the kind of people who fill their yards with rusty junk. Clair tries to ignore her surroundings, choosing instead to dream of a future beyond her rural New Hampshire town. But, when a black dog named Wally is chained up to a pole next door, Clair can’t look the other way. Clair decides to save Wally, and the immediate connection she has with the lovable dog catches her off-guard, but even more surprising is her bond with eighteen-year-old Danny Stewart, the boy next door.
I picked up this book thinking nothing of it: not expecting it to affect me the way it did. It looked like some kind of romance (maybe?) with a dog (super cute, that cover gets to me) set in a more rural community. Now I am amazingly glad I read this amazing book: I’m still emotional over how it ended. There were tears. Even if the summary doesn’t appeal to you, please pick it up anyways, I am sure it will surprise you.

Whippoorwill is a term for people who hang onto their junk – just like Clair’s neighbors, the Stewards, whose yard is crammed full of trash. One really shouldn’t be called junk, though, even if he’s treated as such: Wally, the labrador/great dane mutt who wants nothing more than to play. Clair has decided to take action: she’s going to treat the dog right, save Wally. But she didn’t expect Danny, the boy-next-door, to be something different.

It’s amazing how the author brings us to see how quickly we judge, see things as junk, while to others they can be treasures. How some see Wally as junk, and others will see him as the perfect dog. How some people will throw out what others will use to create art, like Clair’s mom does. How people will quickly judge others as being worthless, or not worth their time, when they can be golden. I was impressed by how much this theme of trash and treasure really spoke to me.

What struck me as well was how realistic and honest this novel felt. It didn’t seem pulled out of hat, or as if it relied on coincidences to drive the plot forward. Everything felt as if it could actually happen, as if it was happening. Even the somewhat magical ending seemed plausible and perfect – proof of a love a father has for his daughter.

It was amazing how quickly I was drawn into Clair’s story, connecting with her. She’s a relatable young woman, smart, caring, but not an idiot. She doesn’t throw herself into rash actions. I liked being a part of her life, as she seemed like someone I really could get to know through the pages of this book.

The relationship with Danny is also something incredibly realistic. You don’t have the usual tropes you see in novels these days, no grand immediate crush, but a slow, growing connection that blossoms from a genuine respect for each other. And as some of Danny’s actions seem odd, Clair is quick to notice them as well, and the ending wraps them up well. All the points I found strange – or somewhat creepy – made sense when we reached the end.

The ending was both perfect and horrible – horrible in the way it left me inside. I have so many questions! I want to know what happens to them all next, and I felt such a loss as Clair – well I’m not going to spoil that for you. We only get closure on a few points, though possibly the only one that really matters. Once you know this character is safe and settled, everything else can be left int he air, however much it hurts.

What really blew me away though was Wally. A lot of books have people connecting over dogs (Marley and Me for example, which also brings you to tears) but Wally seemed more real for me. I cannot stand for animal abuse, and maybe that’s what related me to Clair so quickly: she takes action against this kind of thing. Over the course of the novel, she buys a book written by a priest who loves dogs (which reminds me, any dog lovers out there, How to be your dog’s best friend was written by monks and it’s possibly the best guide to owning a dog you will ever read.) and used it to train Wally to be the best dog he can be. This helps her bond with Danny, but also allows her to share some important life lessons: about finding your pack, about effective communication, about caring. It’s amazing how much you learn about people through learning about dogs.

Whippoorwill will leave you emotionally in need of ice cream for the soul. It comes out September 1st.