This month, I’ve had the pleasure of reading Gravitas: Valkyrie in the Forbidden Zone, an amazingly fun science fiction novel full of powerful women, angry warriors, and humans who’ll believe just about anything you tell them too. Fast paced and clever beyond belief, this book will have you wishing for more, begging for great science fiction novels like this one to fill your afternoons. 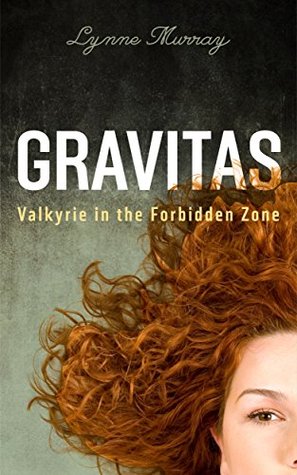 An urgent mission.
A woman with a past.
A dangerous burden.
Sybil, from Planet Valkyrie, carries a risky amount of Gravitas, a top secret aphrodisiac, to trade at a conference on ending slavery in her sector of the galaxy. Attacked by an angry warrior from slave-holding Planet Roggr, Sybil falls through an unmarked portal to land on Earth. The Forbidden Zone. Rescue is impossible. Portals to Earth are sealed. Sybil needs to defend herself, protect her hazardous cargo, and find a way home–while dealing with a damaging overdose of Gravitas.

In a remarkably unique take on the “Lost on Earth” scenario, we follow Sybil, a diplomat from Walkyrie, accidentally stuck on earth with no way home,  and it’s more than just a phone call away. Earth is in the forbidden zone, a planet that she should never be allowed to even get near to, after all those alien races came and influenced ours to worship them. To make matters worse, she’s carrying a very strong aphrodisiac in a necklace around her neck, and it’s driving her insane; she’s got her personal demons on call, and they have a lot to say; her long lost husband – the first one, while her three others are safe at home – has just reappeared in her life, and seems to know a whole lot about earth culture; and she’s being stalked but a lustful, obsessed warrior. To top it all off, Earth people don’t seem to take too kindly to big, powerful women. Sybil must navigate this strange planet, while avoiding getting stuck in the middle of feuding warriors, in order to get back home safely.

I think what really got me loving this novel was how the unusual plot just worked so well. All the elements mesh together in a tapestry of creative storytelling: starting off in media res with an exciting, somewhat confusing beginning, which allows you to get your bearings in this new book just as Sybill does on this new planet, then moving backwards to understand where this woman has just come from, then moving forward again while keeping certain elements hidden until later, the author manages to keep you gripped in the story by keeping everything quickly paced, and by making you care about the characters she has created.

Sybill is a powerful woman: there is no doubt about that. She comes from a Matriarchal society, has three husbands (not including the ex), can carry vast amounts of Gravitas, is well respected and given important responsibilities. Not to mention she is gorgeous: though Walkyrie tends to favor the larger woman, and, sadly enough, that doesn’t translate well to earth. She is strong, smart, and can hold her own in any situation. Not to mention she even manages to empower women on earth, though I will not spoil anything. I found Sybil wonderfully written, relatable even though she is alien.

The premise us unusual, the characters uncommon; it’s fun, it’s funny, with great moments which hit the science fiction high note. It was good to laugh so much.  I think my favorite aspect of this novel was the way the author incorporated alien tourism into world religions. It was incredibly funny to see how certain alien races, alien mannerisms, physical appearance, names, and multiple appendages could have influenced the birth of many religions around the world. Cultural heritage and practices somehow evolving from interaction with beings from another world? Something you hear a lot about in “Ancient Aliens,” maybe, but never tackled with such fun. It was clever to have THAT be the reason that aliens do not visit us anymore: humans are TOO kind, too prone to manipulation, even if it is accidental. Loved it.

The ending I found spot on; I wouldn’t have had it any other way. It was a beautifully written scene. I don’t want to say much here, seeing as how I don’t want to spoil it, but it had me close the book with a smile on my face.

So if you’re looking for some fantastic science fiction, the classic great premise but with a modern, fresh take, you are going to absolutely love Gravitas. You can find it on Amazon, in epub and in paperback.

Check out more from Lynne Murray: