There’s something fantastic in reading a book that opens your eyes (no pun intended). It’s something different from your everyday reading, and for me, the reason I read books in the first place. Not If I See You First is a fascinating novel, that relies more on character growth than plot to tell a story. It was a story with true depth and dimension which I was glad to have a chance to read. 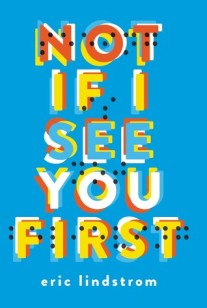 Everyone has secrets. Everyone is a secret.
Parker Grant is a junior in high school who loves to run, has great friends, and isn’t afraid to speak her mind–especially when it comes to how stupid some people can be around a blind person like her. The only topic to avoid is how Parker feels about the boy who broke her heart in eighth grade… who has just transferred to her school. And as long as she can keep giving herself gold stars for every day she hasn’t cried since her dad’s death three months ago, she’ll be just fine. Right?

Parker Grant has a few rules you must never break around her: Don’t help me unless I ask. Otherwise you’re just getting in my way or bothering me; Don’t be weird. Seriously, other than having my eyes closed all the time, I’m just like you only smarter; and the most important one of all, Don’t deceive me. Ever. Especially using my blindness. Especially in public. Break the rules, and you will never regain her trust.

Now Scott, the only boy to ever deceive her, is back in her life after their two high schools have merged. As if Parker’s life isn’t difficult enough to begin with, what with her family moving into her home after her father’s death, and the fact that wants to join the track team, which means she’s going to need to find a running partner. And what if she wants to start dating, too?

The great thing I love about Parker is that she’s flawed. She can be a complete a**hole sometimes, if you pardon my language. The fact she can’t see people flinch means she’s usually more direct with what she says, and never sugarcoats anything, with means she can come off as being incredibly bitchy. But she’s also smart, insightful, and cares deeply about her friends.

The weird thing about this novel was I felt like it had no real plot or direction until I reached the end. Everything revolved around her character growth,  around her realizing that just because she hears everything doesn’t mean she actually listens. And that’s key: because when she learns to actually listen to the people around her, she discovers she can be really blind about somethings, that have nothing to do with the loss of her sight.

It was cool to be int he head of a blind person for a while. To have description of all the senses except sight. To know how things feel and how people sound. What it’s like to run when you can’t see where you’re going. I was wondering why I still made a physical image in my head of how everything looked, when no description was given. Heck, Parker doesn’t know her friends skin color, what they wear, or anything else physical about them:  so why did I fill in the blanks?

What hit me was just how relatable Parker was even under the layers of harsh exterior. She’s the kind of person you don’t see often in modern YA: she’s not afraid to admit she loves her friends, she’s intense and flawed and has difficulty relating to others.She’s too quick to jump to conclusions and that gets her in trouble. She’s no special snowflake, she’s a girl like us going through high school.

This unique and hard hitting novel is something that has me still thinking about it well after the last page was turned. I want to know what happens next, and yet, I’m happy with where the author left us, the small window he’s letting us see into Parker’s life. Well worth the read.

Not If I See You First comes out today, December 1st, from Little Brown Books.