by Aaron Thier
Reviewed by SA

Drop everything and grab this book at once. This book is a vortex that will suck you in and grab you tight, and won’t let you go even after you’ve read the last page and put it down. This is a beautiful, epic novel that I’m seriously so excited to tell you all about. 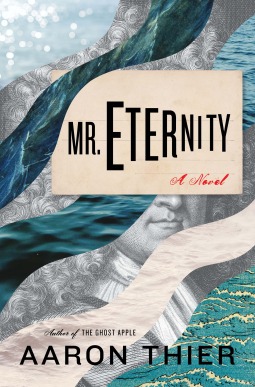 Key West, 2016. Sea levels are rising, coral reefs are dying. In short, everything is going to hell. It’s here that two young filmmakers find something to believe in: an old sailor who calls himself Daniel Defoe and claims to be five hundred sixty years old.

In fact, old Dan is in the prime of his life. It’s an incredible, perhaps eternal American life, which Mr. Eternity imagines over a millennium: a parade of conquistadors and plantation owners, lusty mermaids and dissatisfied princesses, picking up in the sixteenth century in the Viceroyalty of New Granada and continuing into the twenty-sixth, where, in the future Democratic Federation of Mississippi States, Dan serves as an advisor to the King of St. Louis. Some things remain constant throughout the centuries, and being on the edge of ruin may be one. In 1560, the Spaniards have destroyed the Aztec and Inca civilizations. In 2500, we’ve destroyed our own: the cities of the Atlantic coast are underwater, the union has fallen apart, and cars, plastics, and air conditioning are relegated to history. But there are other constants too: love, ingenuity, humor, and old Dan himself, always adapting and inspiring others with dreams of a better life.

There is just so much substance to this book that it’s difficult to lay it all out for you without giving away spoilers. The gist of it is this: five different people, spread from the 1500s to the 2500s, each gives us a window into their lives, surrounding their meeting of Daniel Defoe (or the ancient mariner), a man who seems constant across the centuries. He cannot die, though we don’t know why, and in every time he searches for his lost love, Anna Gloria, an obsession on his.

1560: a native Indian Pirahoa girl sold to the Spanish. She travels with Daniel de Fo and the Christian conquistadors on the search for her home town, which they call El Dorado.

1750: John Green, son of a slave and her master, is living a lie as a gentleman. When Dr. Dan joins him at the plantation, they hatch a plan to steal the landowner’s collection of Spanish coins.

2016: a college drop-out in 2016 worries about global warming, pops pills, and tries to make a documentary about the Ancient Mariner of Key West, who claims to be 560 years old, and together they hunt for treasure.

2200: The seas have risen and the world is no longer the same. Jam, a poor young orphan with barely any education, gets hired to work on a boat alongside Old Dan, who tells him stories and takes him under his wing.

2500: Jasmine Roulette is the daughter of the King of St Louis and president of the Democratic Federation of Mississippi States. Though born to a life of luxury, she is a self proclaimed ‘anachro-feminist’ obsessed with the lost American civilization. Her father buys a slave who calls himself Daniel Defoe, and who has many stories to tell about the past she yearns for.

Consider this novel as a combination of Cloud Atlas, Station Eleven, and Big Fish. When it comes to the man’s stories, telling fact from fiction is nearly impossible, and the characters themselves don’t know for certain that he is what he says he is, a centuries old man. Everyone always asks him about the past, and the stories he tells are compelling, believable, but also fantastical: does he himself believe what he is telling us, or is he having an extremely senior moment?

The novel also addresses the issue of climate change, and our involvement in global warming. However, the author does not get preachy, which is an incredible feat. Daniel Defoe has seen the Americas before the cities we cling to were even thought up, so for him they are just a blip. It reminds us of the cyclical nature of history, how we are doomed to repeat our mistakes. In fact, sometimes old Dan himself seems to state the future as the past, making us wonder just what he’s seen, if time works for him the way it works for us.Every character is dealing with a changing world, in some way or another.

I could spend hours talking about this book: I want to get all my friends to read it, so we can talk about the complexities, the little details slipped between the pages, the questions the book makes ourselves ask. What is truth? Is History true? Why are we doomed to repeat our mistakes? What is worth valuing in this world?

For fans of David Mitchell, in search for another gorgeous book to devour, Mr. Eternity is beautiful, gripping, and deeply complex. Trust me: you need to read this book as soon as it comes out, on August 9th.