by Genevieve Cogman
Reviewed by SA

I’ve found this review very hard to start; there’s is just so much I want to tell you about this book! In the first few drafts, this first paragraph was a gibberish of eager words and a few garbled noises of excitement. Pretty impossible to read, but capturing exactly how I felt about this novel: this novel is too good to put into words! 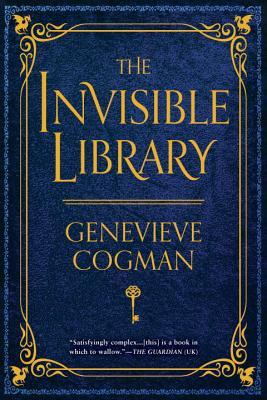 Irene is a professional spy for the mysterious Library, which harvests fiction from different realities. And along with her enigmatic assistant Kai, she’s posted to an alternative London. Their mission – to retrieve a dangerous book. But when they arrive, it’s already been stolen. London’s underground factions seem prepared to fight to the very death to find her book.

Adding to the jeopardy, this world is chaos-infested – the laws of nature bent to allow supernatural creatures and unpredictable magic. Irene’s new assistant is also hiding secrets of his own.

Soon, she’s up to her eyebrows in a heady mix of danger, clues and secret societies. Yet failure is not an option – the nature of reality itself is at stake.

There is just so much that makes this book enjoyable. First and foremost, Irene, the protagonist, a young librarian whom we follow closely. So closely, in fact, sometimes I would get surprised when there weren’t first person pronouns: we’re so deep in her head, I forgot we were in third person. Irene is smart, mature, and pretty badass. I mean, she’s a book loving spy, so the reader falls madly in love with her pretty instantly. She’s also a brilliant protagonist, with clear motivations and a heck of a lot of spunk.

Overall, I think it’s the premise itself that makes this novel so endearing. The library connects all alternate realities, and the librarians who work there gather books from different worlds, acquiring them by any means necessary. Sometimes that means months of undercover work, sometimes that means fighting some giant steampunk insects. It’s all relative. The worlds are sometimes at a different point in history, which means there’s access to Victorian London, modern day earth, some worlds with magic and others with steam… Any universe you can think of.

The author could literally spend all day telling me about a librarian stacking books in that place, and I would read it. The world she had created is just so fascinating, I could read about it for hours.

And this novel is just so thrilling, so exciting! Sure, at times, it’s a little exposition heavy, which makes the pace slow down a little, but I’m convinced that in the sequel we won’t have to worry about that. The adventure we’re thrown into offers a great mystery, sets up a terrifying villain, and leaves us with a lot of unanswered questions. Which means I just can’t wait for the sequel to come out!

I certainly can’t end the review without bringing up our other favorite character, Kai. Kai’s story itself is fascinating, and I can’t wait to know more. He’s smart and loyal, able to follow orders even when he thinks he knows best. After a huge twist I won’t spoil for you, Irene could badger him with questions – which I’m sure every reader wants to ask – but postpones this until after the danger has passed. Which leaves us eagerly waiting for more! We must know more about Kai!

So if you’re looking for Doctor who meets the Librarians, then you need to pick up the invisible library. It’s a book about books (Bookception!) which is bound to make the book lover find love once more.

2 thoughts on “The Invisible Library”