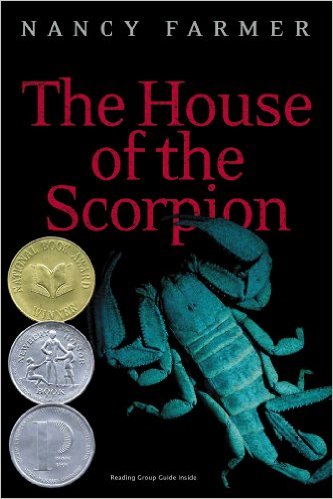 by Nancy Farmer
Review by KM

It’s no secret that I work in a library and I’ve spent the past month knee deep in preparations for our Summer Reading Program. For those who don’t know, the United States has this team called the Collaborative Summer Library Program. This organization arranges our awesome themes and compiles a ton of resources for us librarians. While not all libraries follow it, there’s a huge percentage that do. Why am I telling you this? Because it’s really likely that your local library’s Summer Reading theme is: On Your Mark, Get Set … Read!

Our library has kind of transformed this theme into The Reading Olympics. We’re handing out additional prize tickets to all the people who read books from around the world, whether they be by a foreign author or the setting takes place in another country.

If you live in my town or if your library is doing anything similar, The House of the Scorpion is a great choice to grab an extra ticket.

Plus, it’s awesome. I’m so happy this theme came up this year; I was majorly overdue for a reread of this novel.

Matteo Alacrán was not born; he was harvested.
His DNA came from El Patrón, lord of a country called Opium–a strip of poppy fields lying between the United States and what was once called Mexico. Matt’s first cell split and divided inside a petri dish. Then he was placed in the womb of a cow, where he continued the miraculous journey from embryo to fetus to baby. He is a boy now, but most consider him a monster–except for El Patrón. El Patrón loves Matt as he loves himself, because Matt is himself.

As Matt struggles to understand his existence, he is threatened by a sinister cast of characters, including El Patrón’s power-hungry family, and he is surrounded by a dangerous army of bodyguards. Escape is the only chance Matt has to survive. But escape from the Alacrán Estate is no guarantee of freedom, because Matt is marked by his difference in ways he doesn’t even suspect.

I have to say, in my opinion and feel free to disagree, that House of the Scorpion is the best YA book about cloning. It takes place in this marvelously detailed futuristic world, but one where you can see how our current society changed into that. I loved the explanations, which weren’t laid out in a info-dump, but scattered through the narrative where you needed them.

As with most science fiction novels I encounter, my favorite part has to be the ethics of the entire situation. Clones aren’t meant to be people in this. They aren’t sitting on an island, living lives without the knowledge they’re clones. In this, they are not meant to ever have enough brain function to realize they’re missing out. But Matt does function. He realizes the intents and purposes of his creation. Whether that is more merciful or cruel is definitely a question.

Summer is a perfect time to pick up this book. You may be waiting each week for the next Orphan Black episode and this can certainly fill your time with more science-fiction fun.

More than that, please check out your local library to see what programs they’re running for this summer. We have awesome things for every age group and they’re all free.