by Jeffrey Cook and Katherine Perkins
Reviewed by SA

This week we’re tackling an amazing fantasy novel for Self Published Saturday, a novel you’re sure to love: Foul is Fair, the first novel in the recently concluded Fair Folk Chronicles. It’s a brilliant book that takes you deep into the heart of Faerie, full of magic and danger… and dancing, too. 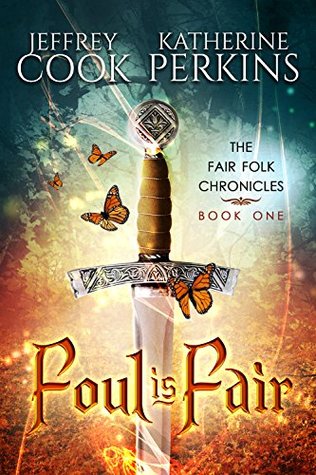 Lots of girls play Fairy Princess when they’re little. Megan O’Reilly had no idea the real thing was like playing chess, guitar, and hockey all at once. Megan had known for a long time that she wasn’t an entirely typical girl. But living with ADHD—and her mother’s obsessions—was a very different thing from finding out she wasn’t entirely human. Somewhere out there, in a completely different world, her father needs help. There’s a conflict, revolving around Faerie seasonal rituals, that could have consequences for humanity—and if Megan’s getting the terminology straight, it sounds like her family aren’t even supposed to be the good guys. As she’s further and further swept up in trying to save her father, Megan may be getting too good at not being human.

When Megan discovers her dad – as well as her best friend – are mythical, she takes it all in one stride: she’s got a quest to follow! She has her father to save, let alone the whole world, the balance of which rests upon him being able to attend a dance that changes the seasons. She’s focused and determined, even without her medication, and she’s ready to take on this challenge if it means making things right for the world.

Megan is a skilled artist (thought she might be addicted to doodling) and begins to slowly see the power of music and signing. She’s got a knack for it, which some might call a little magic. I loved Megan as a character, and her friend Lani just as much. Their friendship is a powerful drive in Megan’s life and gives her strength and determination, as well as support as her world is turned on her head. And I’m such a sucker for female friendships in great novels.

My favorite characters, however, were not the main ones: no, I loved Cassia and Ashling a whole lot. Ashling might be my favorite pixie of all time: she’s sassy, funny, and crazy witty. Not to mention she’s technically living with a pixie disability, and her ‘service animal’ is a crow named Count who’s a personality all to himself. I’ve NEVER read a book like this before! Ashling’s comedic responses to Megan’s whole slew of questions – especially her variety of answers as to why Count is names Count  or where fairies come from – had me rolling on the floor laughing.

While some parts of the novel were exposition heavy, I found the overall creativity of the novel to make up for that. I loved the use of other myths from around the world that I had never heard of: Lani, for example, is part Menehune, which (I only just learned this) is a myth from Hawaii. This gives her a talent for engineering and creating things.

To recap all the amazing things about this book: great representation, love of art and music, love of science and creativity, the world of Faerie, myths from around the world, great adventure… and did I mention it’s a great read for any age?

“I’ve been a huge mythology nerd most of my life, so getting to play with the old myths, and have a series centered around the 4 treasures of Ireland, the 4 lost cities of the fae, and the 4 big seasonal events of the calendar was a lot of fun,” The author told me when I asked about his inspiration, “Thor #279 was one of the first things I ever really read, when I was 5. It sent me scrambling to learn the real myths. So I liked the idea of writing something where readers, especially teens, maybe could, or even would occasionally go running to google some of the things in the books, or read Celtic myth, Hawaiian myth, etc.”

And it worked! I ended up by starting to google “Menehune”and spend a few hours just browsing the interwebs, using this book as a guide. And I learned so much!

If you want a fun and creative take on the world of Faerie, then you’re going to love Foul is Fair. There are four books to this series, all available on amazon. The ebook for book 2 is on .99 sale on kindle through this weekend, as it is the summer solstice!

Like Self Pubbed Saturday? Use the hashtags #SelfPublishedSaturday and #IHeartIndieAuthors to spread the love!