by J.D. Cunegan
Reviewed by SA

Wait… it’s not Satruday, so why are we reviewing a self pubbed book? Well, for starters, I have so many self published books to talk to you about. But Blood Ties also is one that really stands out, and I just have to tell you about it right now.

We reviewed Bounty ages ago, and loved it. The author – an amazing person, by the way – kindly gave me the rest of the series to read and I’m over the moon. So you can even be expecting a review of his latest book, Behind the Badge, very soon.

I loved Bounty so much, so I had high expectations for the sequel. This novel shattered them all: it was way, way better than I could ever have anticipated. It’s exciting, gut wrenching, emotional, and packs a real punch as a kicker novel. 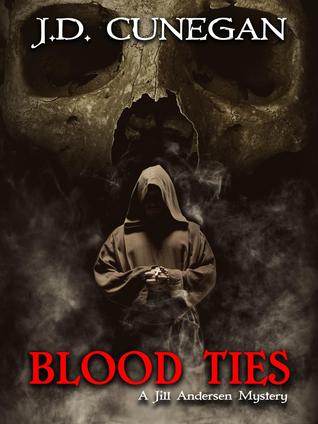 For as long as Jill Andersen could remember, her father was a hero.

But heroes don’t commit murder, do they? The state of Maryland said Paul Andersen did just that, three times over, and was set to execute him for it. But Jill and the rest of her colleagues at the Baltimore Police Department come across the murder of a law student that leaves her hopeful that she can clear her father’s name.

While Jill and her colleagues work against the clock to clear her father’s name, new players emerge, hinting to a deeper, darker conspiracy than what was previously known. An enigmatic faction known as The Order reveals itself, and the mystery surrounding Paul’s alleged duplicity leaves more questions than answers.

Along the way, Jill must not only face the possibility that her father was not who she thought he was, but she must also face the prospect of her secret being revealed. The stakes are higher than ever in Blood Ties, the intense follow-up to J.D. Cunegan’s debut mystery Bounty.

Can Jill save her father before it’s too late? Will she even want to?

Jill is a tough detective and vigilante. No nonsense, smart, seriously determined, a great character through and through. As tough as she is, she doesn’t negate emotions; and she happens to be asexual, too, which is awesome! Yay representation! Jill is one of those characters who jumps off the page into reality, so relatable you could imagine her spending time in your friend group.

This time, we finally delve into Jill’s connection with her Father. Is he innocent… or not? Can she stop him from being executed, and find the real killer in time? And who is this mysterious Order people are suddenly talking about? It’s fast paced, suspenseful, with some kick-ass fight scenes and some real life-or-death moments for our favorite characters.

The writing just flows so smoothly. I’d say effortlessly, but it’s obviously a great writer behind those words who knows how to make the craft seem easy. The entire novel is paced perfectly to keep you flipping every page, wondering what happens next. I was averaging a chapter between metro stops and didn’t want my commute to end.

If you’re a fan of mysteries, then you’ve definitely got a great novel right here to try out. If you loved Bounty, then you definitely need to read this sequel. And if you’re missing Castle right now? You know what I’m about to say: read Blood Ties!