By Kayla Hoyet
Reviewed by SA

You all know this by now, I assume: I love science fiction novels. I devour them by the barrelfulls. It takes a rare, fantastic novel to really stick out: Ghost in the Machine is one of them. It’s clever, it’s captivating, and it’ll keep you guessing until the very end. 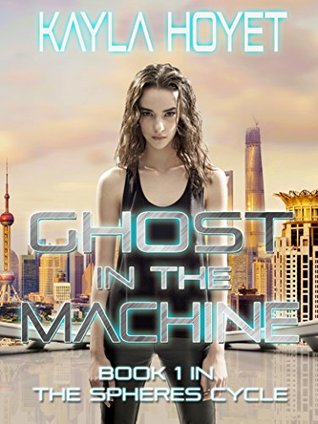 Eighteen-year-old Tyler Gaines has always followed the rules–in part because it’s too much trouble to break them, but mostly because her father’s bedtime stories about the Sphere’s elite red-coat Enforcers scared her senseless as a child. She does what she’s told, just like everyone else, so when she goes to see the Broker–a woman whose sole purpose is to assign a match to everyone in the Sphere–and gets paired with a red-coat Enforcer named Aidan, she tries her best to put her father’s stories to rest and adapt to her new family. When Tyler’s best friend is killed and both fingers and technology point to Tyler as the main suspect, Tyler begins to think that her nightmares are coming to life.

Aidan knows Tyler is innocent, but there’s one big problem: Proving Tyler’s innocence rests on proving that the government’s high-tech system, the system on which the entire population depends, has a problem the likes of which it has never had before. Aidan doesn’t have a lot of time to make his case. If he can’t figure out what’s wrong with the system soon, Tyler may end up paying the ultimate price for a crime she didn’t commit.

In the future Tyler calls her own, automated systems take care of everything. It’s supposed to be infallible… but is it really? When Tyler is accused of a crime she didn’t commit – the murder of her best friend, no less – people are more likely to believe a machine’s version of the events than a humans. But can the machine be wrong?

What I loved about this novel was just how complex Tyler’s character is. She’s young, she’s smart, but she’s also fiercely loyal and can be quite bold if she wants to. She has to put up with so much, and in such a short period of time, it’s enough to break anyone, but not Tyler. It’s impressive how Hoyet ties Tyler’s dancing into the plot, using analogies through dance to show how Tyler is really feeling.

The one thing a computer can’t control in this world is relationships, so they have the Broker for that: an incredible matchmaker that somehow gets it right every time. So it does come off as weird… and kind of creepy… when Tyler gets matched with a man who’s a smidgen older than her and not really her type. But the way the family deals with this is fantastic. They take her in as if she’s one of their own and give her the space she needs to grow. Honestly, I was kind of enamored with Aiden’s family.

The novel is part dystopia, part murder mystery. Who is responsible for that young girl’s death? Could it really be Tyler, since the computer says she checked into her building around the time of death? And if it isn’t her, who is really responsible? The book will keep you guessing until the very end, and you won’t believe who’s responsible!

What’s great? How the ending opens up so many possibilities for the sequel. I’m excited to see what this means for their system, for their world. I can’t wait for book number two!

How’s your week been so far? What are you looking forward to in the rest of it? ✨
Have you ever experienced culture shock? ✈️
What hobbies to you do when you just want to chill? 🧩
What new-to-you author became an instant favorite? 🐊
How was your reading month? Any new favorites? 📖
When’s the last time you had a book hangover? 📖