By Beth Revis
Reviewed by SA

I’m a huge fan of Beth Revis – If you don’t know Across the Universe, check it out now – so when I saw there was a new novel of hers coming out, I pounced on it. Then I had to wait until I actually got home to read it, which is why this review is coming so much later than I had anticipated. In any case, I’m actually quite tired because I was up all night last night finishing it, and just could not put it down. So you’ve been warned! 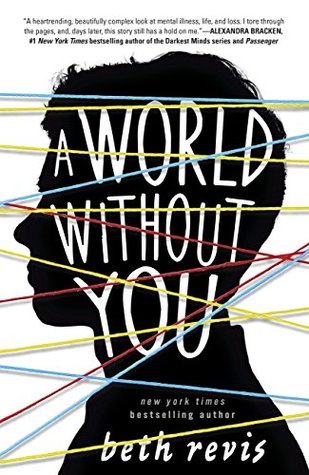 Seventeen-year-old Bo has always had delusions that he can travel through time. When he was ten, Bo claimed to have witnessed the Titanic hit an iceberg, and at fifteen, he found himself on a Civil War battlefield, horrified by the bodies surrounding him. So when his worried parents send him to a school for troubled youth, Bo assumes he knows the truth: that he’s actually attending Berkshire Academy, a school for kids who, like Bo, have “superpowers.”

At Berkshire, Bo falls in love with Sofía, a quiet girl with a tragic past and the superpower of invisibility. Soíia helps Bo open up in a way he never has before. In turn, Bo provides comfort to Sofía, who lost her mother and two sisters at a very young age.

But even the strength of their love isn’t enough to help Sofia escape her deep depression. After she commits suicide, Bo is convinced that she’s not actually dead. He believes that she’s stuck somewhere in time—that he somehow left her in the past, and that now it’s his job to save her. And as Bo becomes more and more determined to save Sofía, he must decide whether to face his demons head-on or succumb to a psychosis that will let him be with the girl he loves.

I absolutely love having this unreliable narrator. When I first read the premise, I believed the novel would be about trying to find reality: does Bo really have powers, or is he deluding himself? Is he right, or is everyone else? But the author makes it very clear where we stand… which means Bo’s perspective cannot be trusted: even though he’s the one telling us the story.

As the novel goes on, due to Bo’s growing psychosis, the story becomes more and more confusing: there’s missing time, jumping backwards and forwards, paranoia, two alternate versions of reality being told at once. Towards the climax of the novel, everything becomes erratic and all over the place, making it difficult to see what’s going on but masterfully growing the tension and the twists. Only a skilled author like Revis could pull off showing this loss of control (even as Bo struggles for just that) without turning it into a jumbled mess.

Bo believes his girlfriend, Sofía, is trapped in 1692 and that it is only through controlling his powers that she will be saved. He refuses to let go. It’s odd to think that for the entire novel, we never truly know Sofía: we get hints of what she struggles with through Bo (as he tells the parts he’s aware of, and what he believes he remembers) or through what the families are told. But her depression is just something Bo cannot grasp.

Every once and a while, Phoebe, Bo’s sister, gets a chapter of her own, from her point of view. It’s so weird to switch to such clarity of mind, and yet, we see she has struggles and confusion of her own to deal with. At first I didn’t get the point of having them, but then I started to see how important it was to see her view.  Kinda her in a nutshell: everyone’s always worrying about Bo, who has much bigger problems, that they fail to see her problems too.

As I said, I could not put this book down. The end was just so exciting, life and death, Bo on the edge, that I needed to keep reading. This book was fantastic. Such a great, brutal look at mental illness, at love and family and psychosis. To read NOW.