First book of the new year! I’ve had this book on my TBR pile for ages, saving it for a bad day so it could cheer me up. And it did more than that – this book is a pure delight. It combines everything I love about space travel, crazy adventures, and hilarious comedy, along with a cast of characters you fall in love with from page one. Hold on to your seats – this book is Fonking hilarious. 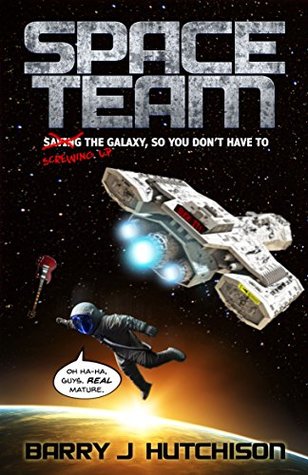 Cal Carver is having a bad day. Imprisoned and forced to share a cell with a cannibalistic serial killer, Cal thinks things can’t possibly get any worse.

It’s not until two-thirds of the human race is wiped out and Cal is abducted by aliens that his day really starts to go downhill.

Whisked across the galaxy, Cal is thrown into a team of some of the sector’s most notorious villains and scumbags. Their mission should be simple enough, but as one screw-up leads to another, they find themselves in a frantic battle to save an entire alien civilization – and its god – from total annihilation.

So. You’ve got an identity thief forced to work alongside villains and soldiers on what’s supposed to be an easy assignment, just doing a drop on behalf of a prominent interstellar corporation. It’s definitely a recipe for disaster. Cal will do anything to survive, including pretending to be a cannibal, resisting the advances of a wolf, or befriending a lump of sentient green shapeshifting goop. And that’s just the start of his problems.

This was the first book I’ve read in a long time that was laugh-out-loud hilarious. And I’ve missed that so much – I really wish more books were like Space Team. Whether it’s the witty comments, the snark from Cal or any of his compatriots, or the ridiculous situations they get themselves into on the worst assignment ever, it just makes me insanely happy to read it. It reminds me of Guardians of the Galaxy (for the rag tag team of villains aspect), definitely giving off a Terry Pratchett vibe for the humor (on par with Douglas Adams, though less introspective if you hate that) and – oddly – the characters remind of of Brooklyn 99, if it was set in space and everyone hated each other just a tad.

The characters’ complexity also got me. No one is what they seem on the surface. You have the wolf girl who’s oddly attracted to Cal (which at first bugged me, until it became clear why), who seems to have an interesting family dynamic. You have the top-of-her-class soldier, desperate to look good to her commanding officers but doomed to fail from the stars, you have the Mech who can either be the bulk or the brains, but never both at once, and you have a lump of sentient green shapeshifting goop, who by the end of the book is your best friend. I feel like we’ve only just scratched the surface of these characters lives, and I’m dying to know more.

And it’s just so gosh darn clever. So much of this book was hilarious just by how on point it was. The running gags the likes of Arrested Development. The Sci fi references left and right. Cal’s obsession with putting the word space in front of everything, for example. Or his fixation on Toby Maguire. Or the awful swearing. It’s just non stop, pages turning themselves, impossible to put down except when you’re laughing so hard and there are tears in your eyes and you need to stop because you can’t see anything anymore.