The Color of Water and Sky, Book 2
By Andrew Gates

Last year, we had the pleasure of interviewing the debut author Andrew Gates, for the release of his Science Fiction novel “IRIS.” Having just read the ARC of KHOLVARIA, the upcoming sequel, I just had to have him back to tell us more!  I like to describe his Color of Water and Sky series as being a science fiction series with the scope of Game of Thrones but the world building of Asimov, and Kholvaria does not disappoint. Potential spoilers if you have not read Iris yet! 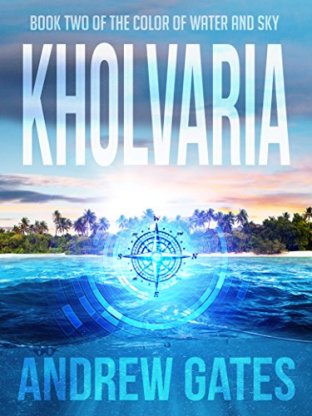 The ancient ones called it America. The survivors call it the New World. Others know it only as Kholvaria.

It is a desperate time for the Federation. The Atlantic Station, the last known city on Earth, has been destroyed. Humankind is on the brink of extinction. Nine survivors flee the crumbling city in a dire effort to survive. Their destination: the planet’s surface, a poisonous landscape untouched for generations. Plagued by danger, disease, hunger, and mystery, they do whatever they must to stay alive. But they are not alone. Other eyes, above and below the sea, watch the survivors with great interest.

For the first time in generations, humanity is coming home. But it may not be to the home they expect.

If you loved Iris, then this book is definitely not to miss. After the devastating ending, which left most of humanity dead, including one of our favorite characters, Iris and the eight other survivors have finally reached the surface. It’s a combination of excitement and shock, as well as complete abject terror. This new world is beautiful, but it hades many dangers, and you never know what to expect.

Once again, the author’s style completely pulls you into the world he created. The imagery is so vivid you truly do feel as if you’re actually there. Unlike the claustrophobic sense that came from Iris, Kholvaria on the contrary feels open to so many opportunities. It’s like taking a caged bird and releasing them into the wild: it’s almost overwhelming for the characters, and that’s something that really comes through.

The pacing is a lot faster than Iris, especially towards the ending when you feel like everything is life-or-death. And, in fact, there is quite a major death, one that left me personally reeling for days.

We also finally get some answers about what we were contemplating in the first book. While we might have guessed some things, or at least tried to, we finally get proof in Kholvaria. The author definitely rewards his readers’ loyalty by validating theories.

We also have a new character who’s introduced who’s like nothing we’ve ever seen before. He might be my favorite POV of the entire series so far, and I just can’t help but want to know more about him!

Andrew Gates proves once again that he is a master of world building and suspense. it’s an addictive, fast paced read that will leave readers begging for more. A must read for scifi fans everywhere.

Hi Andrew! It’s great to have you back on Readcommendations. We here are very excited about your new book, Kholvaria.

Last year, you described Iris in one sentence: There’s an underwater city in the future and the people who live there think they’re safe, but now they may not be.

I made you recap Iris to one sentence; think fast, can you recap Kholvaria in a single word?

Kholvaria in a single word – Unknown

I love that! So Kholvaria takes place right after the events of book 1. What can the reader expect out of the sequel?

Well, without giving too much away, it’s a pretty dark time for humanity right now. The characters are basically starting over from scratch, hence “unknown”. They don’t know what to expect. They don’t know the trials or challenges they’ll face and a lot of surprises are thrown at them.

It sounds like there’s a lot more action in this book than in the first one. Would you say it’s faster paced than Iris?

I certainly would. Ironically though, it takes place over a shorter duration of time. While Iris elapsed the timespan of about 4 months, Kholvaria elapses closer to 2.

Great question! Iris had 5 perspective characters (not including the prologue). Kholvaria has the same amount. I really like the 5 character format. I think that’s a good number. I plan to maintain that number throughout the entire series.

So, let’s say another perspective character dies, which is purely hypothetical of course, I would fill that void in the next book and so on.

Many readers -including me – have compared The Color of Water and Sky series to a Science Fiction Game of Thrones. Do you feel the comparison is apt? Why or why not?

Absolutely it is. There’s a lot of similarities between the two. Tone, pacing, length, style, even the multiple-POV format. I’m a big fan of A Song of Ice and Fire so many of these similarities are largely intentional. What’s cool about those books is that you don’t ever see the full story. You get everyone’s perspective of the story, but there’s no omnipotent “third eye” in the sky showing you what’s going on. Sometimes characters will completely drop out of the book and leave you wondering where they are.

You don’t see a whole lot of writers do that, but I think it’s a smart choice. It’s a way to keep the readers engaged by withholding information, not providing it. If done well I think it’s very effective.

Now I hear you have a novella coming out. What can you tell me about it? How does it tie in with your Color of Water and Sky series, if at all?

Yes! The story is going to take place at the same time as books 1 -3 and will basically provide a linear narrative to the different prologues of each book. Captain Sara Gesetti from the prologue of Iris will make a return, as will Damien Saljov. We’ll find out what happens to them after the Cassidy submarine disaster. We will also get to meet a brand new character, who’s story intertwines with the other two.

The prologues from Iris and Kholvaria will be featured again in the spinoff, this time as regular chapters.

The book will be called Cassidy, named after the submarine that started this whole thing.

You’ve now been a published author for a few months. How has that been? What has been the most surprising thing this change has brought?

The most surprising thing is – now that I’m part of the “writing community”, I’m amazed by how open and accessible it is. There are lots of people out there willing to provide help, whether it be with advice or with shared writing ventures. I’m amazed to see how open everyone is. And so kind too.

What’s your favorite part of being a published author?

And my favorite part of being a published author is knowing that this hobby of mine is actually worthwhile and profitable. There was a period of time when, if I just did my hobbies, I used to feel like I was wasting my time. But now I feel like I can still do things for fun and be productive.

Once again, you wrote a powerful ending that leaves the reader desperate for more. We didn’t have to wait very long for Kholvaria: is the third book currently in the works?

It is. In fact, I’d say about 60% of the rough draft is already written. It’s going to be a more unique story because each perspective character is on a wholly separate journey, rather than one shared journey. So it has a different flow and pace to it. Going back to your earlier point about A Song of Ice and Fire, I would say the next book is going to resemble that series the most in a sense of the characters all being separate and doing their own thing a lot of the time.

Right now I’m guessing the release will come around this time, early summer-ish in 2018. Followed very shortly by Cassidy. Those two books will likely come out mere weeks apart.

And to wrap up: For those who haven’t started the ACoWS series, if they were to be stuck on an island for a year with access to only one new book, why should they pick Iris?

There’s a lot of mystery in Iris, so if you’re on an island with nothing to do, you’ll have a lot of time to think of theories both during and after you read it.

Are you excited yet? Check out the official page for more information. Kholvaria is set to release on May 27th, but you can already preorder a copy right here! A huge thank you to Andrew Gates for providing me with an ARC and an opportunity to interview him.

If you’re a fan of hardcore science fiction, then you’re going to love The Color of Water and Sky! Check out the trailer for IRIS right here.

One thought on “KHOLVARIA + Interview with ANDREW GATES”

There was an error retrieving images from Instagram. An attempt will be remade in a few minutes.