by Gabe Hudson
Reviewed by SA

This book was so insanely different from anything I’ve read lately! As I started to read the novel, I thought “ok, this is not for me. Probably someone in High School or Middle School would like it more.” But to my amazement, the book was stuck in my hand: I couldn’t put it down! Even after finishing the book I can’t put my finger on why, all I know is this was insanely fun! 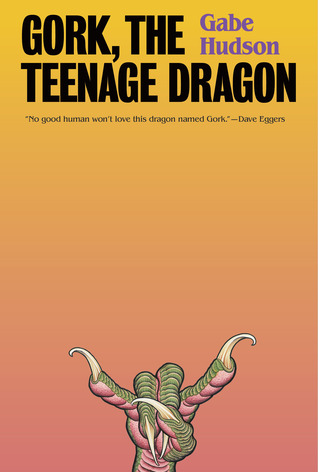 Gork isn’t like the other dragons at WarWings Military Academy. He has a gigantic heart, two-inch horns, and an occasional problem with fainting. His nickname is Weak Sauce and his Will to Power ranking is Snacklicious—the lowest in his class. But he is determined not to let any of this hold him back as he embarks on the most important mission of his life: tonight, on the eve of his high school graduation, he must ask a female dragon to be his queen. If she says yes, they’ll go off to conquer a foreign planet together. If she says no, Gork becomes a slave.

Vying with Jocks, Nerds, Mutants, and Multi-Dimensioners to find his mate, Gork encounters an unforgettable cast of friends and foes, including Dr. Terrible, the mad scientist; Fribby, a robot dragon obsessed with death; and Metheldra, a healer specializing in acupuncture with swords. But finally it is Gork’s biggest perceived weakness, his huge heart, that will guide him through his epic quest and help him reach his ultimate destination: planet Earth.

A love story, a fantasy, and a coming-of-age story, Gork the Teenage Dragon is a wildly comic, beautifully imagined, and deeply heartfelt debut novel that shows us just how human a dragon can be.

At WarWings academy, graduation isn’t like what we’re used to here on earth. You don’t ask a date to prom – you ask a dragonness to be your queen. Together you set off in a spaceship to colonize a new world with your hatchlings. Gork might have survived High School (though only by the skin of his teeth) but can he survive graduation? Can he convince his crush – who he’s never even heard speak – to be his queen?

To make matters worse, Gork suffers a chronic illness that makes him pass out multiple times a day, and keeps his social ratings and rank near the very bottom of the pile. His horns are stubs. His heart is huge. Not exactly mate material…

I think what really drew me in was the world building: it was spectacular! What’s not to love about technically advanced Dragons with spaceships? With robots?  With body switching evolution machines? Time machines – and time junkies? It’s brilliant for fans of science fiction, with throwbacks to famous tropes (my favorite throwaway gag was the reverse grandfather paradox, it had me in tears!). Its Dragons  – IN SPACE!

Gork is witty and fun, and his world is interesting and totally off the wall crazy. I loved the creativity there! But the plot wasn’t really my cup of tea, and the ending got me a little confused. The author has a habit of repeating himself/certain plot points that made me eye-roll. Yet I’m still unsure about a few things? I have questions!

But I have to admire the twist at the ending. I definitely do not want to spoil it here, but I have to say that most of the things that annoyed me about Gork’s goals were resolved, and I felt like it was a really important lesson for teenagers everywhere.

While there was just something I personally couldn’t connect with, I am sure other readers will instead latch on and go crazy about it. I would seriously recommend this to teens 8th-10th grade!

SWEEPSTAKES! 5 lucky readers will get their claws on Gork, The Teenage Dragon

A wacky, exuberant, heartfelt debut novel: the unholy child of The Hitchhiker’s Guide to the Galaxy, Harry Potter, and Sixteen Candles—and this time with dragons.

Knopf is having a giveaway! YOU could win a hardcover copy of Gork before it even comes out! Follow this link here to enter the sweepstakes.

What’s the last book you read in a single sitting? 🐉
How do you handle book overflow? 📚
What preorders are you most excited about? 📚
Thank you everyone for the AMAZING response to the cover reveal of Over the Moon! 🚀
Livres dans la Boucle is a book festival in Besancon with a hundred+ authors 😍