This book is everything I need in a sci-fi: brilliant conflict, strong characters, love, betrayal, and of course the immensity of outer space. And in a fangirly voice – this book was SO COOL. 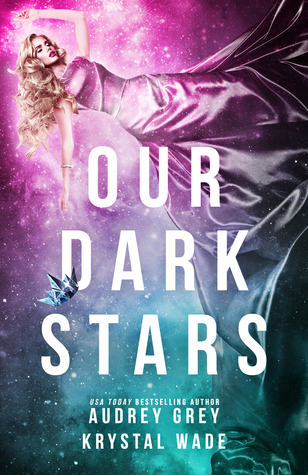 While she sleeps, the whole universe changes.

Princess Talia Starchaser has it all. Wealth. Status. Adoring citizens. But on the eve of her eighteenth birthday, she’s forced to publicly betray her best friend, a companion mock she’s had since birth, setting events into motion that lead to the destruction of the humans, and the princess floating through space, a remnant of a time when humans ruled over droids.

One hundred years later, half-mock captain Will Perrault and his ragtag crew discover a device floating in space. When a very human Talia emerges from its depths, Will suspects she’s the key to buying his way back into the regiment he once commanded against the last remaining rebel humans—and the ruling mock queen’s good graces.

Both Talia and Will would rather get space-tossed than trust one another, but with the queen’s forces chasing them across the galaxy and the fate of both worlds hanging in the balance, they’ll forge the unlikeliest of alliances to survive.

Talia Starchaser is now of age to accept the responsibilities of her role as princess, and she does so with dignity despite knowing the limitations imposed on her. She’s being married off to a stranger in the name of politics, and forced to abandon the life she loves, piloting starfighters with her best friend. The latter is a Mock: an android so close to being human, the only thing stopping her are the imposed limitations in her program. The two are inseparable, until the moment when Talia is forced to chose between their friendship and her hold on the kingdom.

A hundred years later, the results of this choice are being found by Will, a Mock who lives in a world where the roles are now reversed, and humans are subjugated. The reign of the Starchasers, once the first to have colonized the realm, is all but forgotten. Together, Talia, Will, and his crew must find their way in this dangerous universe – and right wrongs that cannot be left in the past.

I loved the intricate play between the two perspectives – and time periods. The author meshed them together so perfectly that it felt natural when the two lives collided. And there’s something I just adore about ‘stasis’ tropes; when a character awakens to find the world they knew completely upside down. How the author builds a universe populated by Mocks that makes sense, with new rules and limitations.

Exploring this world was a blast. Seeing how much had changed, seeing how much needed to change, it really dragged the reader in. I could not put the book down at this point. I loved Talia, with her cute naive side and her well trained, educated royal side; and Will, the mock with his humanity partially intact. The supporting characters were lovable and engaging as well, especially Jane whose character arc was powerful.

The ending happens incredibly fast. Once you find the twist, which was mildly predictable, from there the book races to an ending. I was surprised it wasn’t more drawn out, but it worked. I finished the book both wishing for more and glad it was self-contained, because I could imagine the characters having their happy ending.

All in all, this book is an engrossing work of YA science fiction, perfect for fans of the Starbound series. An irresistible read!

P.S. Back in December, I published a short story called DARK STAR, also about a princess in stasis found by a scavenger. It was published in the FROM THE STARS anthology by Torment Publishing. After I started reading this book and realized the similarities, I raced to the author’s Facebook page to discover we must have been writing our stories simultaneously. This is like an episode of the Twilight Zone!

What preorders are you most excited about? 📚
Thank you everyone for the AMAZING response to the cover reveal of Over the Moon! 🚀
Livres dans la Boucle is a book festival in Besancon with a hundred+ authors 😍
At last! I can finally reveal the cover for Over the Moon, my F/F SciFi retelling of the Wizard of Oz! Out January 10th 2023 🚀 🤖
Ding Dong, the Technowitch is dead… 🚀
I just got the best #bookmail: NONA THE NINTH IS FINALLY HERE!