Gosh, I missed fantasy reading books like this one. A highly entertaining story which reads like a DnD campaign with your best friends. Like Lord of The Rings, but with hints of Terry Pratchett, with subtle humor and pop culture jokes thrown in so creatively that they don’t take the reader out of the story. 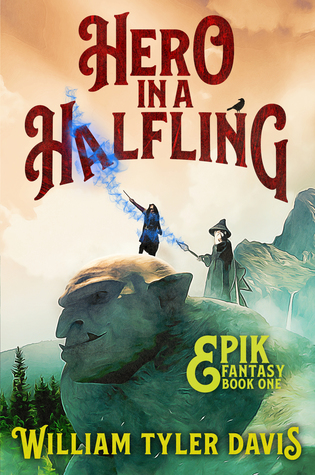 Not all halflings dream of magic…

But Epik isn’t like the rest. Adventure. Excitement. He craves those things. He would rather learn magic, not follow a wizard on some fool’s adventure…. Or so he thinks.

The problem: magic is outlawed. After setting out for the city, what Epik finds in Dune All-En isn’t at all what he’d hoped. No magic. And few wizards.

Luck, or something more sinister, is on the halfling’s side. He meets Gabby, a wizard who is kind enough to rent him a room, or rather, a closet, at his now-defunct magical supply store. And as a group of mountain trolls threatens the city, Epik sees the opportunity to do something, well, epic.

If only the halfling inside him would stop peeking out.

While most of the story is told from Epik’s perspective, we get a healthy dose of flashbacks and a few other fun characters get to tell their side of the story. The villainous hand of the king plotting his ruler’s demise; the hilarious mountain trolls who just want to feast on human flesh; the soldier who’s never seen real action before… the reader gets to see the wide scope of the action and feel invested in the plot, which has a rather quick pace that accelerates towards the end.

The real strength of this book lies in the amazing characters, who could be doing absolutely anything and I would still read them. Gabby the Wizard had such personality; Epik was so likable; Todder too relatable. I would pick up the second book in an instant just to hang out with them again!

2 thoughts on “Hero In a Halfling”