The Untamed Series #4
By Madeline Dyer

If you haven’t read the Untamed series yet, you’re really missing out. This dystopian set in Africa pitting sci-fi against spirits is one of my all-time favorite series and one which I recommend left and right. So when I got the opportunity to Beta read for the author, I was more than thrilled. Dyer’s epic conclusion to the Untamed series will leave the reader trembling and shaking. What an adrenaline rush, what a roller coaster of a book!

(Spoilers for the first books from here on out) 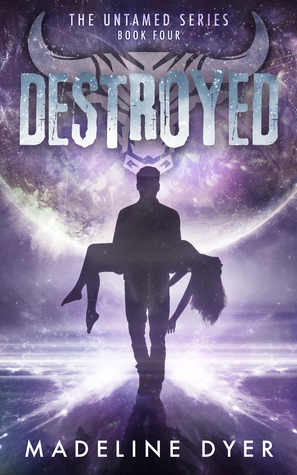 Seven Sarr, the most powerful human in the world, is alive—and she’s on the run from her enemy. With the Dream Land gone, the Gods and Goddesses dead, and the Untamed’s number of Seers at a record low, Seven knows her people must attempt to work with the Lost Souls—including the most volatile and dangerous spirits—if they’re to have a chance of beating the Enhanced Ones once and for all.

But when the Enhanced impose a new threat and Corin’s life is at stake, Seven must make her hardest choice: save the man she loves and let her people perish, or allow Corin’s death so the Untamed can survive.

Locked into a tight countdown to her own demise and solitary entrapment within a torturous realm, Seven must make her decision quickly. Her Seer powers are the strongest, and her death will end the War of Humanity once and for all. When the new morning dawns, the world as she knew it will be gone. What—and who—will be left behind is up to Seven.

Will her love shape the future of the world?

After the jaw-dropping ending to Divided, a lot of questions lingered about the new shape of the world. And it looks grim: the gods are all dead, the dreamland, destroyed, and the survivors of the massive seer battle are few and far between. Seven must lead them all to safety, knowing that the end is near, for better or for worse.

It’s impossible to put down this book. So much happens, and so quickly: Seven must try to rally the remaining Untamed while learning to balance her new incredible power, but it seems to hopeless. You can feel the oppressiveness of a dying world, and the feeling that the end times are really here. Time itself seems to be unraveling. We meet new characters, pockets of Untamed surviving the only way they know how. Seven is faced with tough decision after tough decision, trying to lead her people through the worst possible times.

Seven has grown so much since we first met her, all those books ago, learning her mother had just died at the hands of the Enhanced. She’s stronger now, and incredibly powerful, but at the same time, she’s just as scared and uncertain as any teenager. She struggles with the weight placed upon her but does what she must, showing true bravery – while not always being the wisest. Her relationship with Corin has also grown, though it’s tough to maintain an air of romance when the world is ending.

There are some truly mind-blowing moments. Certain characters reveal secrets I never saw coming, and per usual Rayleigh is up to his mind tricks, but more intense than ever. We never know who to believe –  if even Seven’s own mind can be trusted. An incredible price must be paid to save the Untamed, if only she’s willing to pay it.

And the ending… that ending… I had to read it over three times to be sure I saw what I saw really did just happen. I need more people to read it so I can freak out with them about it!

Destroyed is the epic conclusion to one of the most exceptional dystopian series of the decade. Brilliantly plotted and complex, it is a powerful finale that will break many a reader’s heart.

All I can say is: bring tissues. You’ll need them.  But not for what you think!

Just got some fabulous news: The YA anthology I helped create last year has been mentioned in Suspense Magazine as one of the best anthologies of 2021! We were just wondering how to celebrate its one year anniversary next month and this came as such a lovely surprise.
More bookmail! Part of my Waterstones haul that got seperated from the pack. Another book I know next to nothing about except that everyone here wants me to read it. And it’s pretty? ❤️
The sun came out today for the first time since October!
Today’s bookmail! Have you read any of these? I was so thrilled when I saw Waterstones was having a sale that I didn’t pay attention and accidentally got a copy of a book I already had because I thought it was a sequel. (Thought Ariadne was Electra! Lol.)
New year’s resolution: read more French books. I got so into bookstagram FOMO that I stopped going to local bookstores and libraries? I’m so out of the loop on current bestsellers and don’t recognize anything on shelves. Time to fix that!
Happy 2022 everyone!