If you’ve had the pleasure of reading Roshani Chokshi’s Star-Touched Queen and Crown of Wishes books, then you know why I’m enamored with her writing. Beautiful, lyrical prose and engrossing tales that leave you begging for more: she is a modern master storyteller. So when I heard that she was coming out with a series of short stories, I was ecstatic. And I was blown away. 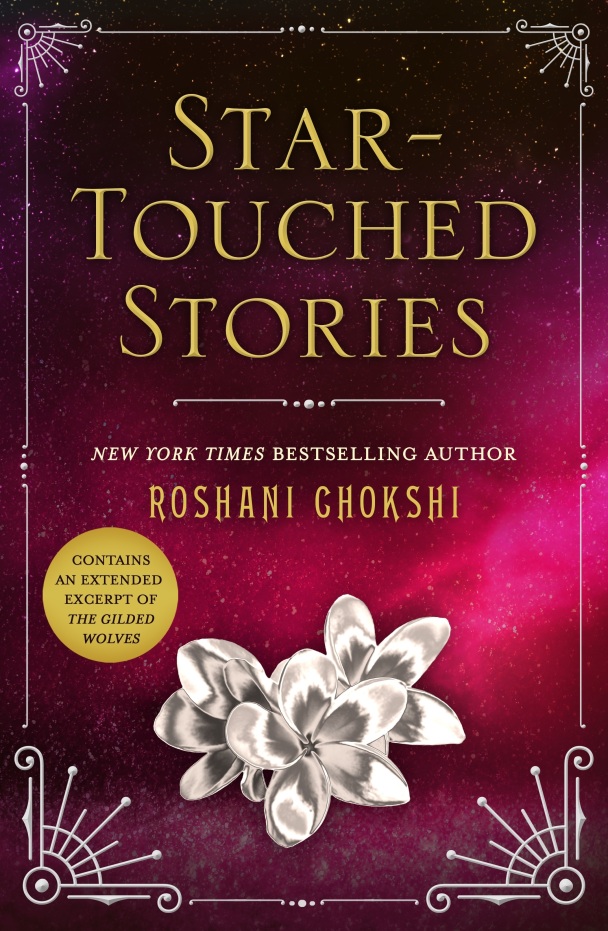 He was Lord of Death, cursed never to love. She was Night incarnate, destined to stay alone. After a chance meeting, they wonder if, perhaps, they could be meant for more. But danger crouches in their paths, and the choices they make will set them on a journey that will span lifetimes.

Now that her wish for a choice has come true, Aasha struggles to control her powers. But when an opportunity to help Gauri and Vikram’s new reign presents itself, she will have to battle her insecurities and maybe, along the way, find love.

There is a tale whispered in the dark of the Empire of Bharat-Jain. A tale of a bride who loses her bridegroom on the eve of her wedding. But is it a tale or a truth?

Each story may be self-contained, but you should read her books in order to fully appreciate them. Death and Night is the prequel for the main characters in The Star-Touched Queen. Poison and Gold is a spin-off at the end of Crown of Wishes, following Aasha. And Rose and Sword is the epilogue of Crown of Wishes, spanning decades in a single story. That last one shattered my heart for all the right reasons, and I feel tears coming on as I think about it again.

I loved the chemistry between Night and Death in the first story. Their courtship was actually really cute, while being worthy of an epic. Seeing how their love blossomed, and how their relationships with their friends affected them even before Star-Touched Queen was a great touch. I think, of the bunch, this is the one story that will fill you with love and hope.

Now that Aasha is living with Guari and Vikram after the events of Crown of Wishes, as they prepare to marry and unite their two kingdoms, she is scared that her powers are out of control. She’s deadly and afraid of her own self. But when she is offered the chance to become their spy mistress, it’s an opportunity to find her place in this human world. I loved her training: it’s my favorite part of fantasy tales, to be honest. Seeing characters faced with seemingly impossible scenarios and then using their skills to get out.

As for the last tales, I won’t spoil a thing. It was the shortest of the lot, but the most passionate. It shows me just how powerful Chokshi’s writing can be, on top of beautiful. I’m in awe!

ROSHANI CHOKSHI is the New York Times bestselling author of The Star-Touched Queen, A Crown of Wishes, and Aru Shah and the End of Time. Her work has appeared in Strange Horizons, Shimmer, and Book Smugglers. Her short story, “The Star Maiden,” was longlisted for the British Fantasy Science Award.

A Q&A with Roshana Chokshi

What was your favorite bed-time story (or tale in general) when you were growing up?

The one that stands out the most that terrified the living daylights out of me was TAILY-PO, an Appalachian horror story that for some reason is told to small children.

Of all the terrifying and bone-chilling characters in your books, which one scares you the most?

Probably the antagonists of A Crown of Wishes because they’re the result of what happens when you cannot let go.

Out of all the characters in your novels, which one did you have the most fun writing about and who do you relate to the most personally? What was the most surprising thing you learned in creating your characters?

In the world of the Star – Touched Queen, I think the one who I related to the most was also the one that I had the most fun writing: Kamala! There’s just something about the demon horse that resonated a lot with me. I think it’s because she does everything that I would do in a fantasy story, which frantically derails the plot and whine to her friends about how hungry she is all the time.

What inspired you to create this fictional world? Were there anyRomo mythologies that particularly inspired you?

I was really inspired by the childhood stories that my grandmother told me. To me, they were so rich with details and texture that it really shocked me how these worlds and mythologies were never explored in mainstream literature. I was particularly inspired by Greek and Hindu mythology.

Why did you feel it was important to add Star-Touched Stories to this world you’ve created? What do you want readers to gain from the stories? Do you think there are any more stories to tell from the Star-Touched world, and if so, who you most like to write about next?

For me, this collection of stories is my farewell to the world that I created. It was extremely cathartic to write these three stories. I want readers to gain a sense of closure. I want readers to feel as much as I did when I with the stories. Who can say whether or not there are more stories left to tell in this world? 😉

Will you miss writing this world and characters?

Absolutely! They lived in my head for so long that I feel strangely weightless to be without them.

Is there a scene or character from one of your stories that you’ve had to cut which you really wish you could share with readers?

There once was a speaking monkey character… But I had to let go of him. Maybe he’ll reappear some other time.

How is writing short stories different than writing a full-length book? How different is it to write YA and MG? How has your writing evolved?

Writing short stories is really different from writing a full-length book because you’re ultimately writing to a punchline in a shorter amount of space. There is less space to explore so the language must be very deliberate. I think my writing has evolved to become a lot more character focused than I once was. I still love gorgeous, decadent prose, but I believe that the best kind of language is that which is emotionally filtered through the feelings of a character.

What is the best advice you would give to inspiring writers?

Read often. I realize that sounds trite, but so many people retread the same path with stories out of comfort or nostalgia. I totally understand this and I’m one of those people who loves to reread my favorite books but I never found a sense of my own writing voice or writing style without reading a wide variety of works.

Get your copy now!