By Quentin Tarantino and Matt Wegner
Reviewed by SA

It’s been a while since I’ve reviewed a graphic novel, so I thought it should be time to share a good one with you all. Especially those of you who are fans of Tarantino’s Django, a brilliant, violent movie set in the deep south in the 1860s. Because, if you ever wanted to know what happens next,  now you can; presenting Django/Zorro, the official sequel to the story. 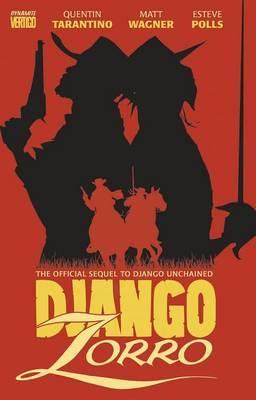 Oscar Award-winning writer/director and Django creator Quentin Tarantino teams with Eisner Award-winning comic book creator Matt Wagner to write the official Django Unchained sequel, uniting the gun-blazing Western hero with the legendary swordsman of literature, film, and comics: Zorro! Set several years after the events of Django Unchained, Django again pursues evil men in his role as a bounty hunter. Taking to the roads of the American Southwest, he encounters the aged and sophisticated Diego de la Vega by sheer chance. Django is fascinated by this unusual character, the first wealthy white man he’s met who seems totally unconcerned with the color of his skin… and who can hold his own in a fight. Django hires on as Diego’s bodyguard, and is soon drawn into a fight to free the local indigenous people from brutal servitude. Learning much from the older man (as he did from King Schultz), he discovers that slavery isn’t exclusive to his people, as he even dons the mask of Zorro in their mission of mercy!

The plot takes place in the south, where Django is still hunting bounties, but a chance meeting with Diego de la Vega, an old man with many secrets, will take them all the way to Arizona, which is not part of the United States yet. There, the Archduke of Arizona is attempting to build the first railroad across the state, but the construction comes with a terrible cost: he’s enslaving the local people and working them literally to death. His abuse towards the people does not go unnoticed, and Diego, alias Zorro, must step in to prove that the Archduke is a fraud, and free the people he is destroying. But he’s going to need help, and Django seems like the perfect man for the job.

This graphic novel was fun and fast to read. It was a fantastic sequel to the film, and a crossover I never knew I wanted, but was so glad had happened. Who knew it could go so well? Not knowing the character of Zorro very well, or that of Diego de la Vega, I was pleasantly surprised to find such a bold and strong person, a perfect partner for Django.

The one thing I found a little off was the pacing – there was a lot of exposition in the beginning, which gave a very compelling story, there’s no denying that, but the ending flew a little too quickly in comparison. It happened way too fast. This story renders fantastically in graphic novel form, but for those of you wanting another movie, you may have to wait a little bit, because I don’t think it will render very well on the big screen.

All in all, though, I absolutely loved the fact that we finally know what happens next to our friend Django. And Hildy too! She gets a mention, though no ‘screen time’. I was not familiar with Wagner’s work bringing Zorro back to life, but I am curious now, and would love to read his new comics. Diego de la Vega is a pretty badass character, defying all appearances. As I said before, he makes a great partner for Django, though it can be argued that Django makes a good partner for Diego.

Bonus content: like most comic compilations, there’s a bit of bonus content in the end, a good 40 pages of it. This wouldn’t be a complete review if I didn’t tell you a little bit about it! We have the script for the graphic novel, written by Wagner and Tarantino, as well are some very cool concept art/alternative covers. The artwork is gorgeous, though admittedly, having just read the comic, I found the script a little redundant. However, for anyone wanting to imagine the comic as a movie, the script is a definite help.

Definitely a violent comic, just like Tarantino’s film: not for those who would like a peaceful read. It was a fun, fast thrill ride with excitement around every corner. If you’re a fan of Django, you definitely don’t want to miss it.

The official pub date is the 24th of November, by Dynamite comics. Happy reading!

Now I’m just going to try and get the Django theme song out of my head.