Those of you you have been reading this blog regularly probably are aware of my obsession with this amazing self published author, R.R. Virdi. He’s the author of the Grave Report series, nominated for a dragon award, overall amazing person, and about to launch a new series, “The Books of Winter,” an Urban Fantasy world that’s set to become a classic. I’ve had the privilege of reading Dangerous ways – the first book – and I have a lot to tell you! 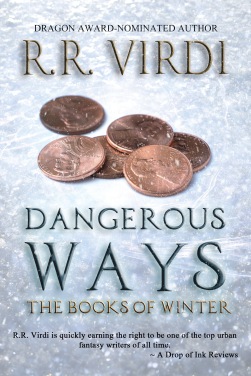 Jonathan Hawthorne has lived over a century beholden to one rule: do not meddle in mortal affairs. He’s broken it twice. So when he crosses paths with Cassidy Winters, he’s forced to interfere again.
Strike three. And the third time’s not the charm.
Hawthorne is swept along as Cassidy slips through the cracks in reality. And being hunted by bands of monsters doesn’t help.
To find the answers they need, they’ll have to play in a dangerous world. One where the odds and rules are stacked against them. They will have to navigate magical courts, queens and lords all while trying to keep Cassidy out of their scheming hands.
If they fail, she will end up a pawn in a plot that will consume them all.
Hawthorne will have to face the consequences of his past, and risk his future to ensure Cassidy can have one of her own.
For a man with all the time in the world–it seems to be running out–fast!

Fans of the Grave Report series will be pleased to know that the author has kept the same wit and charm that draws you into his works. We’re exploring much much more of the world that Vincent comes from, from a completely different angle. The worldbuilding that has gone into this series is outstanding: from the Trolls to the Magic itself, the creative twists to the lore will have you spellbound.

We’re introduced to a new character, Johnathan Hawthorne, an immortal who cares too much about helping us mere mortals – though admittedly, it’s not like he plans to get swept up into other people’s messes . When Cassidy Winters – Cassie – falls into his life, he has no choice but to help her. He’s a girl who can create rips in the universe… and every faction wants a piece of her.

It’s a race against the clock, a fight against his own institution, a desperate quest to help this girl and stop the people who want her dead. This of course means dragging some unwilling allies along into this, or traveling to places where they’re not exactly welcome. No one said it was going to be easy.

There’s just so much to love about this book. The effortless style that sweeps you into the narrative and sucks you into the plot – it seems as though the author had as much fun writing it as we have reading it. And truth is, this thing is a monster of a book: it’s about the size of  A Game of Thrones, though I admit I read Dangerous Ways in half the time because it was just so impossible to put down.

If you need a book to gift your friends this holiday season, might I suggest this one. It’s fun, exciting, and absolutely huge to boot! You’re going to need a copy yourself – but you only have to wait until December 14th.