One of my favorite crime series is Bounty, the adventures crime-solving detective Jill Andersen who moonlights as a vigilante with cybernetic enhancements. So when the author announced he was writing a fantasy novel, I was incredibly excited. Notna is everything I wanted, and more. Action packed and exciting – it’s like Indiana Jones and Supernatural had a baby, only that baby decided the world should end. 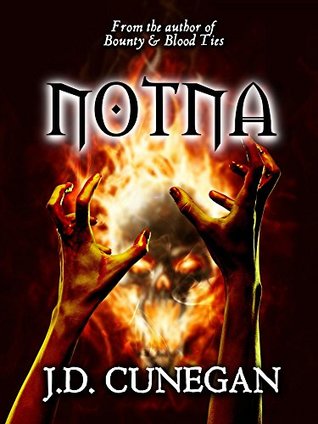 History’s most peaceful race created one of its deadliest weapons.

Forged in the Living Flame by a long-extinct alien race, The Gem of Notna is the stuff of legends, on par with Pandora’s Box or the Holy Grail. But once archaeologist Dr. Jack Corbett stumbled upon the crystal deep in the Amazon, he triggered a whirlwind of events and found himself neck-deep in a centuries-old holy war. The Divine and the Underworld have been locked in a virtual stalemate for the past three hundred years, and the Gem of Notna could be the key to breaking it.

With the gem in his possession, Jack discovers a world of monsters and gods, as well as an entirely different plane of existence that watches over our own. Old grudges resurface, fallen warriors are reborn in the most violent of ways, but at the end of the day, the fate of the world may well rest in Jack’s hands.

What always gets you hooked on Cunegan’s writing (something I love about the Jill Andersen series) is how the seemingly effortless style pulls you right in. Reading the book is almost like watching a movie, with just the perfect amount of description to have you imagine intense battles right before your eyes. Unlike the Bounty series, however, the scale of this adventure is massive: we’re in the middle of a holy war, between different planes of existence, connecting different countries and even dimensions.

On top of a huge scale end of the world apocalypse scenario, we also have lovable characters you can’t help to root for, and a prologue that breaks your heart just two pages in. Jack and his girlfriend Cassandra are professors of Archeology, hired to retrieve a legendary gem from deep inside the Amazon rainforest – only to get thrown into a battle between good and evil that has lasted for millennia, culminating in an epic final showdown on earth and in hell itself. But these two loveable lovebirds are determined to save their world from destruction and will stop at nothing to protect us. Even if it means giving into a prophecy and embracing the role of Chosen One…

What’s refreshing is also having the romance portion of this adventure be between two people who have been very much in love for quite a long time. There’s no will they/won’t they, no awkward flirting: only two committed people supporting each other (quite literally) to the ends of the earth. It’s so fantastic to have a healthy relationship in an adventure novel like this!

The supporting cast is also quite amazing. Whether they’re displaced out of time, or common people embracing their role in this mess, or even those who have lived at war all their lives, they’re complex and steadfast.

And the villain(s) – what’s not to love about hating them? Vampires, demons from hell, Gods out of time, giant purple… wait, I won’t spoil it for you. How Cunegan has managed to merge so many myths and genres, I will never know. It’s masterful!

All in all, if you’re looking for fun, Notna is the book for you. Cunegan has entered the realm of fantasy with swords drawn, and you’re not soon to forget him! Brilliant and energetic, impossible to put down, treat yourself to a high stakes adventure with Notna.

And now – an interview with the author, J.D. Cunegan himself!

R: You mentioned before that Notna was an idea you’ve wanted to work on for years… where did the idea come from? 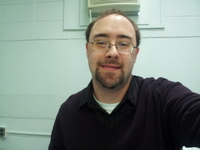 JDC: It mostly came to me when my comic book tastes started expanding. When I first started reading them, I wasn’t just a “Marvel guy,” I was an X-Men guy. If it wasn’t X-Men, I didn’t read it. But once I got to high school, I started reading different comics from all sorts of companies, and two in particular – Spawn and Witchblade – stuck out to me. In reading those two, I started getting ideas for stories of my own to tell. Notna was one of those stories, even though a lot of what I created back then hasn’t survived over the years. But the bare bones of the story – the prophecy, the gem, the war – came to me once I started branching out with my reading.

The Jill Andersen books examine, at their core, what it means to be a hero – and Notna asks much the same question, but from an entirely different perspective. Whereas with Bounty, I use moral gray areas to examine heroism, Notna is more about the notion that even the most ordinary among us can achieve transcendent heroism.

R: Unlike your Bounty series, which is a crime thriller with sci-fi elements thrown in, Notna is a fantasy novel with magic and mythology. Did you find it easier or harder to write in this genre?

JDC: I thought it would be harder, but it actually wound up being easier. I wasn’t as beholden to reality as I sometimes am with the Jill Andersen novels, which gave me a lot more freedom and a lot more leeway in terms of what I could get away with. When I’m writing one of Jill’s books, I still have to keep the real world in mind occasionally; when I’m writing about monsters and gods and demons, the rules are a little more flexible.

R: Which character was your favorite in Notna? Were they also your favorite to write? Did you find any one of them particularly challenging to bring to life?

JDC: Cassandra wound up being my favorite, because there was a time when I didn’t know what to do with her. About midway through the first draft, she was little more than the romantic interest character – and I wanted her to be more than that, because I pride myself in not letting my books devolve into those common tropes. Nothing I came up with worked – one potential storyline had her dying at Demostricus’ hand, only to later return as a vampire, but I hated how that story smacked of “kill the love interest just to motivate the male lead.” I’m not sure exactly when the storyline I settled with first came to me, but once it did, I knew I had a winner and loved how it sort of turned the “Chosen One” trope on its head (and was, in an indirect way, a nice callback to Buffy the Vampire Slayer).

R: Did you feel any particular pressure when writing this novel? Either from your fans, or time, or anything else?

JDC: I did, actually. Part of it came from the fact that I was writing in a genre that was already stuffed to the gills with fantastic books – including some of my personal favorites. But I also felt pressure because as I started promoting the work, I saw it was generating the sort of excitement none of the Jill Andersen books had – so knowing there was already a fanbase for it, knowing I had to make sure I didn’t disappoint those people, added some pressure (and possibly some mild panic on launch day).

JDC: Both. In the mornings, I have to have my cup of coffee. But at night, when the house is quiet and I’m hunched over my manuscript (especially this time of year), nothing soothes and helps me write quite like a warm mug of green tea. I bought myself a Keurig a couple years ago, and it’s probably one of the best purchases I’ve ever made.

JDC: I’m a total pantser; for whatever reason, whenever I try to plan or outline, it sucks all the fun out of writing and I get blocked. Even with my current book, Betrayed (book five of the Jill Andersen series), I tried to detail each chapter to keep myself on track. Well, 10 chapters in, the story completely detoured on me. I think, as a writer, I enjoy it when my own characters and my own world surprise me – because if they surprise me, chances are they’ll surprise my readers.

JDC: I’m definitely a night owl, and I have been since I was in college. I’ve never quite shaken that habit, which is occasionally problematic now that I have a 9-to-5 job. I think I’m physically incapable of falling asleep before midnight, and most of my best writing happens after the sun goes down.

R: I was so excited to see your ‘Easter Egg’ reference to R.R. Virdi! How did that come to be?

JDC: One of the Facebook writing groups I’m in (I think it was NanOhana) had a challenge for NaNoWriMo 2016 (Notna was my project that year) daring us to include Virdi in our work somehow. Mystical bookshop owner with two otters as pets just felt like a great fit, and it was fun to write those two chapters. In an indirect way, Virdi’s work (particularly Dangerous Ways) helped inspire Notna, so it was also a hat tip of sorts to him.

R: So many mythologies are represented here… how did you decide on them? What kind of research did you do?

JDC: Religion, regardless of which one you choose, can create a wonderful backdrop to tell stories like this. And my own research into pagan traditions, while completely unrelated to writing, inevitably wound up inspiring my writing. Between my pagan sourcebooks and some of my old White Wolf tabletop roleplaying books, I had plenty of inspiration to turn to when it came to building the world these characters inhabit. My research wasn’t necessarily done to make sure I was accurate; I’m pretty up-front about the liberties I took in this book, but having that foundation there made playing with the mythology and the history a lot of fun.

R: And finally… will this be a standalone novel, or will we be returning to this universe sometime soon?

JDC: Notna is a standalone (mostly because I can’t imagine trying to juggle more than one series), but that doesn’t mean I’m done with the world or the characters I created there. You probably noticed the Bounty Easter Egg I placed in Notna, which establishes that both books take place in the same universe. So chances are, some of the characters I introduced in Notna will appear in future works (maybe even the Jill Andersen books).

Also, I’m working on an anthology of sorts, called Legend of the Gem, which will be a collection of short stories detailing the history of the Gem of Notna over the past couple thousand years. It’s very similar to the comic book series Tales of the Witchblade that was popular back in the 1990s, and just researching stuff for that book has been a lot of fun.

And don’t forget to check out the newest novel in the Bounty series – BEHIND THE MASK  here – just out this week!