by Kelly Blanchard
Reviewed by Sarah A

Happy Self Published Saturday! I’m so excited to share this book with you, that I spent the past week speed reading it so I could talk about it STAT – it’s quite a long book, and so full of incredible… well, everything… that I didn’t want to wait until next week.

Someday I’ll Be Redeemed is the first in the Chronicles of Lorrek series, set in a high/epic fantasy universe and infused with science fiction and technology. It’s full of political intrigue, plots, and magic, along with characters so complex they’ll have your head spinning. By the end of it, you’ll be devastated – and yes, that’s a good thing. 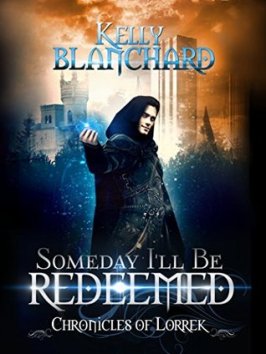 Everyone thinks him to be dead–or guilty. Without a word or sighting of Prince Lorrek of Cuskelom these last ten years, all believe the rumors of his crimes, which he is said to have committed, are true. However, when he finally returns to clear his name, Lorrek realizes the only way to find redemption is to become the very man they think him to be in this time when advanced technology challenges ancient magic to war.

Lorrek’s been dead for a decade – only he hasn’t. When he appears at the gates of a neighboring kingdom, begging for sanctuary, he begins a chain of events that put the realms on the brink of war… but what really happened, ten years ago, that shattered the kingdoms?

I have to admit, at first, I was struggling to get into this book: the political back and forth is not usually my cup of tea, and took a little while for me to follow. The effort in world building here is outstanding, but the author has a lot to tell in so short of time that I felt overwhelmed by the information. But as soon as the ball is rolling, the story gets faster and more exciting, to the point where you cannot put it down.

This is especially true in the second half of the book, which takes place back before the events that sent Lorrek into Oblivion. Here, we have medieval fantasy characters coming to a realm of technological innovation in search of a cure for Lorrek’s cousin (and subsequent lookalike) whose magic has been infecting him. But no-one’s motives are as they seem, and there’s a lot more going on than anyone can realize… this for me was an outstanding portion of the book, and it had me completely engrossed.

Which is not to say I wasn’t impressed with the rest of the novel – the first half lays the groundwork, filling you with so many questions, while the second answers them, in such a way that you can’t help but notice just how intricate the plot really is. Everything is connected. And the way the characters grow and change in those ten years? Incredible writing.

Speaking of the characters, I just love them. Vix is by far my favorite: a brilliant assassin, who can be hard and cold but also adorable and romantic. There’s a depth to her you hardly ever see in fantasy women. Even the villains aren’t 100% evil – we see their motivations, we even root for them at moments.

Stylistically, the author could have done with a little less repetition: sometimes a sentence would pull me out of the story, which got a little annoying. But no matter. The story is what counts, and Blanchard has crafted a complex narrative with brilliant world building and relatable characters. I just can’t wait for the sequel!

You can purchase Someday I’ll Be Redeemed here on amazon, in ebook and paperback. Don’t forget to check out the sequel, I Still Have A Soul!