(Quick note from S.A. : I am so sorry I haven’t posted a review in a while! Finals really took it out of me and I simply ran out of time. I barely read anything new this month! In any case, I am back, and will hopefully share good books with you on a more regular basis. I’m going to review some other books I read on our Tumblr, so we get more reviews in a week! – Sarah)

Every once and a while you find yourself reading a book, and before you know it, it’s got its hooks sunk deep into you. You try to put it down, but it calls you back: it doesn’t scream “find out what happens next,” but slowly whispers, “come, you must read more.” And Dreams of Shreds and Tatters  did exactly that: it beckoned me to read more, enticing me with an intriguing plot, compelling characters, and a nice dose of magic. 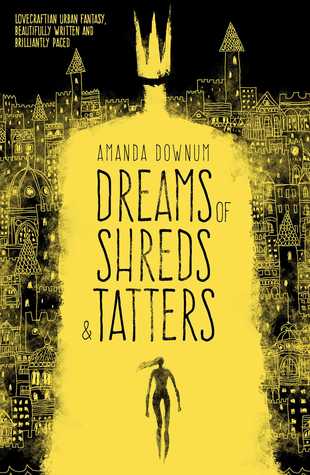 Blake has vanished: Liz Drake knows this, she saw it in a dream. Her dreams have always been more on the nightmare side, dangerously real, definitely not natural. As they steadily frighten her more, she knows she has to drop everything to find her closest friend, never expecting to see him in a coma, all the way in Vancouver.

Slowly she uncovers strange aspects of her friend’s life: his close circle of friends, calling themselves artists when in fact they are much more, hiding dangerous secrets; snippets of the night of the accident that put Blake in a coma, which took his lover’s life; a drug which affects everyone differently, and no one wants to talk about… and magic.

As the nightmares grip her tighter, Liz finds herself caught between two worlds: the real, waking world, and the mysterious city of her dreams, the real of the monstrous Yellow king and his minions, who are seeping through doors into the waking realm. Knowing Blake’s life is on the line, she must fight her way through the dreamlands, saving her friend, and maybe the world.

What instantly caught me with this novel was the unique style: it’s like a distinctive style of art. The slow pace with the mystery bubbling to the top; the cold, dark undertones, that go between the real world and the dream ; the distinctive magic, and magical beings. None of them seem dramatic, which makes none of them out of place: they feel natural in the novel. AT some points, it does feel a little Lovecraftian, though it still stands its own. It’s an impressive feat.

The characters themselves also defeat the stereotypes. I am almost certain that Liz is Asexual (it may be outright said, but I may have missed it), and it’s completely natural. Kudos to the author! Actually, there is a diversity in the characters you don’t usually see, and none of the characters seem be be ‘tokens’. It’s an honest book, even if there is magic.

Even with all the magic in the forefront, relationships themselves may be the main focus of the novel. Liz and Blake’s friendship is so close, they’re almost siblings: she would go to the ends of the earth to save him. The relationships between Alex and Liz. We have people who care deeply about each other, with different forms of love.

But even with all this love, we can feel Liz’s cold isolation, which ads to the darkness of the novel. And she’s not the only POV character: the mystery deepens as we see the other players in the game, and each of them is as fascinating as the next. The artists, the magicians. The drugs and the secrets. Will Liz find them all out in time?

However, one thing that annoyed me was the symbolism that was shoved in your face. the idea of masks, the ties with greek mythology: a little bit of “show, don’t tell” could have gone a long way. It irked me, but only for a little bit. It’s probably just me. It doesn’t distract from the main plot.

So if you’re looking for a slow, bubbling plot, that will grip you in a gorgeous dark world of magic and intrigue, you should try Dreams of Shreds and Tatters. It will leave you wanting for more.