It isn’t often that I’m able to review comics or graphic novels and it’s always a nice change when I am. The cover of this miniseries, all compacted into one book, is so eye-catching that I couldn’t pass it up. I will say, though, if you have an option to get either the physical form or the digital, go with the physical book. There is just something entrancing about reading a graphic novel or comic in book form that you don’t get when you have to scroll down a single page. 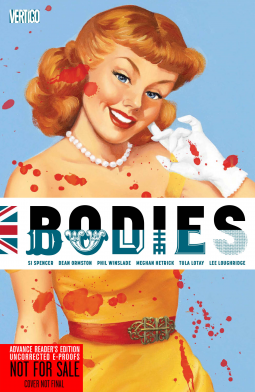 VERTIGO brings you a graphic novel with four detectives, four time periods, and four dead bodies – all set in London. Edmond Hillinghead is an 1890s overachiever who’s trying to solve a murder no one cares about while hiding his own secret. Karl Whiteman is our dashing 1940s adventurer with a shocking past. Shahara Hasan is 2014’s kickass female Detective Sergeant, who walks the line between religion and power. And Maplewood, an amnesiac from post-apocalyptic 2050, brings a haunting perspective to it all.

Si Spencer (HELLBLAZER: CITY OF DEMONS, THE VINYL UNDERGROUND) executes a centuries-spanning murder mystery like nothing you’ve ever seen before, with four sensational artists illustrating a six-page chapter in each issue: Dean Ormston, Phil Winslade, Meghan Hetrick and Tula Lotay.

I have to warn you: This isn’t a book about housewives from the 50’s committing murders. I kind of wish it was, because that’d be awesome and it’s totally what I thought of when I saw the cover, but this plotline is just as good.

While compelling, this story is definitely a part of the what-the-hell-am-I-reading genre. I really didn’t know how the four stories through time were linked even half way through the novel, which made the resonating lines, “This is brutality,” and “Know you are loved,” even more creepy. Seriously, this isn’t a book I’m pulling out before bedtime — you could be preparing yourself for nightmares.

My favorite detective had to be Shahara Hasan. She’s brilliant and not going to put up with anyone’s BS. I loved reading her pages, watching how she handles the ideas of patriotism and racism while trying to solve this ancient murder. Her artwork, in my opinion, was the best, too. I think Maplewood’s story pulled everything together for me, even though her’s started out the most confusing.

The story ties together in a way you wouldn’t expect, focusing on the cyclical patterns of life, death, and prejudice. It’s a great read, overall, and I can’t wait to get a physical copy.