It is with great pride that I bring you Black Dys and the Deflowered Virgin, the first book we’re reviewing as part of our Self Published Saturdays! Every month we will bring you one great book by a self published author that should not be missed. Hopefully this will encourage readers to discover great books they would not have otherwise known about.

If you’re looking for adventure and magic, then this is truly a book you need to read STAT. It’s got everything the classic adventure tale has: an amazing cast of characters, mystery, intrigue, trickery… as well as wizards, zombies, and pirates. 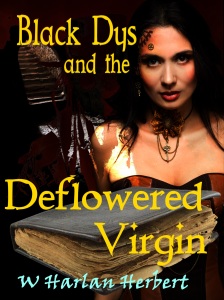 Dyschoraf Pan Weiglin, or Dys for short, is in a tight spot. He has no memory of the night before, yet now he’s got blood on his sword, he’s in bed with Veleria, the virgin daughter of the high priest of the Hopping Toad, and he seems to have stolen the most cursed book of spells his masters at the Five Points. Now he’s on the run, Veleria by his side, desperately trying not to get caught by demons, wizards, or any high priest and his following who aren’t too keen on having their favorite virgin taken away. Who knows, maybe he’ll be better off sailing the seas with a bunch of pirates…

Oh gosh, how this book was fun! The story was a non-stop thrill ride, with Dys going from one situation to another before you could blink an eye. The way he rolls with it, adapts and changes to his new situation, makes you think you’re reading many different novels at once, without them actually disjointed. It starts off as fantasy, with magic and wizards, but soon you’re reading a different tale, that of pirates and treasure and plots.

The characters really bring this story to life. Dys is a smart man with a terrible past, and even without emotions he’s got a depth and dimension you don’t always see in fantasy novels. Vel is a cunning woman, and she surprised me by how quickly she picked up the ways of piracy, showing that she is more than just a priest’s daughter.

But it is the band of pirates that really shone for me. While I had a little trouble keeping up with everyone present (who’s who here?) they were all such colorful characters that I enjoyed every minute with them. I particularly likes Tack, their captain, who just so happens to be a kind of elf that appears to be a small child. This leads to some pretty hilarious looking images when you read some of the fight scenes.

What elevates this book though is the fact that it also has a rich, unique universe, and its own variety of magic, with its own rules. It’s very interesting to learn about Dys’s skills, and how he uses them, but also his limitations. The fact, for example, that spells erase themselves after use, even from the very mind of the man or woman who cast them. I found this unique perspective on magic fascinating.

If this was a movie, though, it would have to be rated R. For our younger readers out there, you may want to be careful, as the language can get a bit rough. It’s a little explicit, and definitely not for everyone. Personally, I thought it added a nice touch, bringing some of the more colorful characters to life. So fair warning: Sex/violence/language run amuck.

One thing that I found a little odd, however, was how quickly a key point could be forgotten. Some interesting threats were announced at the beginning of the novel… and never came back. The variety of the plot sometimes made it feel disjointed: the ease in which Dys slips from one persona to another is either a testament to his ingenuity, or an overuse of luck and coincidence. I’m not sure how I feel about this, though it did not stop me from enjoying the novel. I would have liked to have seen more of Vel, though!

Overall, this novel was fun, fun, fun. It was fantasy, adventure, a hint of satire. Check it out on July 1st, on amazon.com. It is well worth the read and sure to become a favorite!

Just got some fabulous news: The YA anthology I helped create last year has been mentioned in Suspense Magazine as one of the best anthologies of 2021! We were just wondering how to celebrate its one year anniversary next month and this came as such a lovely surprise.
More bookmail! Part of my Waterstones haul that got seperated from the pack. Another book I know next to nothing about except that everyone here wants me to read it. And it’s pretty? ❤️
The sun came out today for the first time since October!
Today’s bookmail! Have you read any of these? I was so thrilled when I saw Waterstones was having a sale that I didn’t pay attention and accidentally got a copy of a book I already had because I thought it was a sequel. (Thought Ariadne was Electra! Lol.)
New year’s resolution: read more French books. I got so into bookstagram FOMO that I stopped going to local bookstores and libraries? I’m so out of the loop on current bestsellers and don’t recognize anything on shelves. Time to fix that!
Happy 2022 everyone!