High school drama can seem pretty funny from the outside, but truthfully, for some it’s life or death.  With the technology we have today, it’s becoming way too easy to bully someone without consequence; it’s becoming easy to get distracted and not notice the warning signs of someone that needs help. For anyone who recognizes these problems, and for those who haven’t any clue what I’m talking about, this novel is mandatory reading. 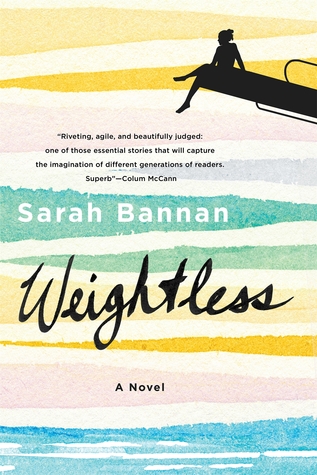 When 15-year-old Carolyn moves from New Jersey to Alabama with her mother, she rattles the status quo of the junior class at Adams High School. A good student and natural athlete, she’s immediately welcomed by the school’s cliques. She’s even nominated to the homecoming court and begins dating a senior, Shane, whose on again/off again girlfriend Brooke becomes Carolyn’s bitter romantic rival. When a video of Carolyn and Shane making out is sent to everyone, Carolyn goes from golden girl to slut, as Brooke and her best friend Gemma try to restore their popularity. Gossip and bullying hound Carolyn, who becomes increasingly private and isolated. When Shane and Brooke—now back together—confront Carolyn in the student parking lot, injuring her, it’s the last attack she can take.

The thing that caught me right away about this novel was the narrative form. The perspective is from a first person plural – we – and it catches you off guard. I know when I started to read Weightless I was waiting to know the name of the person who was recounting all this, only to find that it actually represented everyone. The perspective of the novel is an eye opener: everyone can see what’s happening and completely ignore the warning signs. It’s a little scary, honestly.

The issues that are brought up make me sad, because I know so many people caught in similar situations. Eating disorders, the fear of becoming fat when in fact you are fading away. Cyber bullying, out for everyone to see and no one can, or will help. Physical bullying, where everyone turns a blind eye. Depression, and suicide, when people say they never saw it coming, when in fact they were part of the problem. Weightless deals with the issues teenagers face in a high school environment, and it is not sugar coating any of it.

The novel chronicles the rise and fall of Carolyn, a young fifteen year old girl, remarkably smart, who moves to this new, small town. Everyone in Adamsville has known each other for years: they all attend church together, pray over the sports team together, gossip and grow together. And no matter how much they like her, Carolyn will always be an outsider: she’s too pretty, too nice, too smart. She doesn’t know how to deal with the small town popularity contest, doesn’t even want to play. This is what makes the first person plural narrative so powerful: the “We” is always sharing gossip, telling itself things about this girl. We is turned into this creature, a monster that thrives on partial truths and full on lies, warping its perspective of this normal person until she has become some kind of non-entity. Who even is Carolyn?

The pacing was slow, thoughtful. It takes place over an entire school year, so that the transition between loved and popular to hated and outsider is slow, natural. I loved how the author used Facebook posts and letters, even Carolyn’s essays, to show us how her character was evolving. It felt incredibly realistic. The hints about her fate, slowly dropping through the novel, created fantastic anticipation and made me crave to read more.

The ending, however, did not. I felt as if the reaction of the community (even the world) was blown out of proportion, it’s what we would have wanted to see happen rather than an actual, realistic consequence. I do not want to spoil anything for anyone! But I did find it was odd, more like wish fulfillment for the reader.

In any case, this is a tough novel to read because the subject matter is so important and heavy. Even so, it’s a fantastic book.

N.B. (A micro rant about the American school system) I don’t get American high schools, you know? So much bitching! Not only that, but is “Protagonist” really a word too complicated for a Junior in Advanced english? I learned it in sixth or seventh grade! Come on! And do you really have to be in an higher math class in 11th grade to learn what a cosine is? I was taught trig in ninth grade, I just don’t get why it takes so long here.

But the bitching, the bitching! One thing that almost made me put down the book was how bitchy everyone was to each other. Encouraging eating disorders in order to slim down! (That scene in the bathroom physically hurt me). Calling people sluts and spreading rumors about STDs? What is wrong with this picture?

That’s probably why this book was so on point. For me, it was provocative. It opens the discussion on the issues on the forces social structure within the confines of the public school environment. And there’s a whole lot to talk about.