This week has been crazy! I’ve had my wisdom teeth out, which has made me less productive, which is weird because I thought it would give me more time to read. Thankfully, though, I have JUST the book to recommend to you all: the first book I ever reviewed, or at least, seriously reviewed; a fantastic, self published novel which deserves the spotlight. I’m talking, of course, about the amazing first novel of R.R. Virdi, “Grave Beginnings,” a unique urban fantasy story which grips you and won’t let you go. 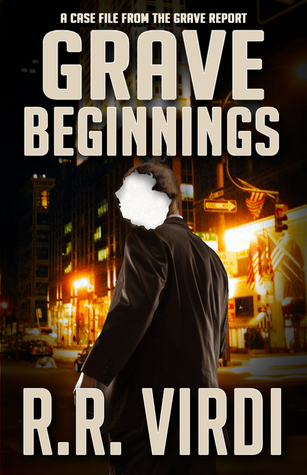 Thirteen…
As far as numbers go, it isn’t a great one. Hell, it’s not even a good one and Vincent Graves is going to find out just how unlucky of a number it can be.
Because someone, or something, is killing people in the Empire state, and whatever it is, it gives people everything they ever desired and more. And it’s the more that’s the problem!
Well…it’s one of the problems.
Vincent’s investigation also seems to have drawn the attention of a relentless FBI agent and then there’s the little bit where he has only thirteen hours to solve the case, or he dies.
Talk about your literal deadlines…
…No pressure.
By the end of this case Vincent will come to understand the meaning of an age old proverb: Be careful what you wish for – because you just might get it!

Full disclosure, I love supernatural detective novels, but I have a hard time finding ones that are actually intelligent books. A lot pander to the reader, and have no true essence, no meat. They start to blend together, becoming boring, repetitive, copies of one another.

Not so for Grave Beginnings. Right from the the beginning, the reader is dragged into the story and clings on tight for the thrill ride. It’s almost impossible to put down – as a matter of fact, I read almost the entire book in one sitting. it’s addicting, catchy, and it’s one of those books you want to shove into your friends hands as soon as you can.

The story centers around a soul who wakes up in the body of a dead man. This soul, Vincent Graves, is somehow caught between this world and the next, and to move on, must solve supernatural murders by inhabiting the recently deceased. The man he is now walking around as – Norman – recently came about an extreme bout of luck, which left him looking younger, thinner, and with a lot more money in his pocket. But it didn’t last long, because something put him in the ground quite soon after. Our hero has thirteen hours to solve his murder, before he must move on again.

Virdi masterfully plays with the myths of the supernatural, introducing us to a whole new host of characters, drawn from the most unlikely of folklore. It’s always great to see a fresh take on the supernatural: too often these days authors limit themselves to taking old myths and making them sexy for a general audience. You won’t find that here – no sexy vampires or werewolves, thankfully! Instead, some intriguing myths that I don’t want to spoil for anyone. Also, gnomes. There are gnomes, and not in the way that you might think.

Graves is a character with a lot of spunk and sass. He’s witty, and sometimes uses pop culture references to help deal with an impossible situation. It makes it a whole lot of fun to read his point of view: as serious and deadly his situation may be, he always has time for a funny remark. It adds so much depth to his character: as weird as it might be for him to be trapped in between bodies like this, he’s still a fascinating person in and of himself.

Seriously, this book should be a TV show. Or a movie. The plot is just so fun, so compelling! Ask anyone who’s read this novel, they’ll all tell you just how much they adored it, or how they devoured it. It’s pure , intelligent, fun. If you like the Dresden files, Supernatural, or Castle, then you’ll adore this novel.

Now here’s the awesome news: it comes out in print TOMORROW. As in, starting tomorrow, you’ll be able to buy this fantastic novel and hold it in your hands; you’ll be able to put it on your bookshelf, sure, but more importantly, you’ll be able to shove it into all of your friends hands. because you know that’s what I’ll be doing.