Those of you following my Instagram might have seen my middle-of-the-night post, where an exhausted me at 2 am finished reading the last page of Fragmented and found myself in a whirlwind of emotions. I hadn’t even realized how late it was, I simply could not put the book down. I’ve been so excited I could barely wait until today to tell you about it. Well, it’s Self Published Saturday, and I’m here to tell you about Fragmented! 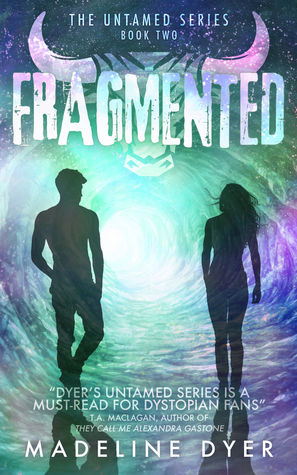 After the terrible battle against the Enhanced Ones, Seven and Corin find themselves on the run. With the Enhanced closing in, Seven knows they need to find other people on their side. So, when the opportunity arises to join the Zharat, one of the last surviving Untamed tribes, it seems like the perfect solution.

But the Zharat lifestyle is a far cry from what Seven’s used to. With their customs dictating that she must marry into their tribe, and her relationship with Corin breaking down, Seven knows she has to do something before it’s too late. But that’s easier said than done in a tribe where going against the rules automatically results in death.

And, with the Enhanced still out there, nowhere is truly safe for the Untamed–least of all for the most powerful Seer in the world…and Seven soon discovers how far people will go in order to ensure she’s on their side in the War of Humanity.

Battling against the emerging web of lies, manipulation, and danger, Seven must remember who she was meant to be. Her life has never been more at stake. Nor has humanity itself.

Many series suffer from a weak second novel. But Fragmented is the Empire Strikes Back here, and is even stronger than the first book.

I was captivated by the world that Dyer created in Untamed: a future where most of humanity live with chemical ‘augmenters’, and those who refuse the drugs are hunted down. Unlike most dystopias I know, there’s this incredible spiritual element: Seven, the protagonist is a seer capable of speaking with them through dreams. The spirits have a massive, sometimes physical effect on the land, able to change it or roam it at will. All in all, this is astounding worldbuilding which made me desperate to read Fragmented.

Fragmented has a much faster pace because of the short timeframe. While Untamed took place over weeks, months, Fragmented is the course of just a few days. Seven, Corin and Esther are all that is left, and decide for their safety to band with a massive tribe called the Zharat. But just because they’re Untamed does not make them good people.

The Zharat are an incredibly patriarchal society, and part of what I loved about Fragmented was how on edge I was the entire time. To put it simply: these guys are absolute creeps. To keep humanity going, their only weapon is their babymaking. Women are nothing but a tool in this regard. Seven’s strength and abilities are put to the test when the Zharat community refuses to treat her as a real person. I was cringing the entire time they were with them.

The character growth is also pretty incredible here. Seven is not only trying to make her voice heard in this new community, but also trying to keep her relationship with Corin alive and healthy. Not to mention that her Seer dreams are strangely stopped now that she’s with the Zharat, and she can’t mention that fact to anyone, because Zharat culture sees Women-Seers as demons. Not to mention the guilt she feels from the last battle…

We also learn more about the place of the Spirits and Gods within not only this culture, but the war itself. At the climax of the book, I was gripping the page as things became clear and the mysteries unraveled. I wanted to scream at the book.

This book has honestly been very difficult for me to review with a level head, because I’m still shattered from the ending. I just cannot wait to get my hands on Divided, the next book in the series!

You can pick up a copy right here!