This novel was nothing what I expected, and yet it is now stuck in my mind like an idea that just won’t go away. It’s one of those books that’s so breathtaking, so gorgeous, it becomes unforgettable. Fair warning, scifi fans: this is not hard scifi, this is not a space opera: it is something different, something more. 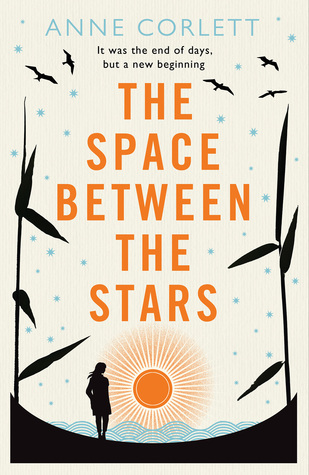 All Jamie Allenby ever wanted was space. Even though she wasn’t forced to emigrate from Earth, she willingly left the overpopulated, claustrophobic planet. And when a long relationship devolved into silence and suffocating sadness, she found work on a frontier world on the edges of civilization. Then the virus hit…

Now Jamie finds herself dreadfully alone, with all that’s left of the dead. Until a garbled message from Earth gives her hope that someone from her past might still be alive.

Soon Jamie finds other survivors, and their ragtag group will travel through the vast reaches of space, drawn to the promise of a new beginning on Earth. But their dream will pit them against those desperately clinging to the old ways. And Jamie’s own journey home will help her close the distance between who she has become and who she is meant to be…

The virus hits, and humanity as we know it is gone. Less than a dozen or so survivors per planet. The virus has consumed so entirely that the dead are nothing but dust in sunbeams. Jamie is one of the survivors, seemingly alone on a frontier planet, so she finds hope by clinging to one idea: she needs to find her ex-husband on Earth, as they promised they would do so long ago. She’s not alone: soon, she finds a religious man with a troubled past; a woman slowly losing her mind; a pilot with a cold exterior, and his engineer; a young prostitute, and a mentally challenged boy. Strays. Stragglers. Survivors. Together, they decide to head to Earth.

The surprising thing about this novel is just how… calm it is. Not so say that the plot isn’t gripping, it’s just that you can almost feel the voices snuffed out. The author juxtaposes small, personal loses (or quite large ones) with the wide scale loss of your entire species. Jamie’s loss of her siamese twin, then unborn child, then the crumbling of her relationship with Daniel are poignant pains that are still valid in front of the collapse of mankind.

It’s really a book about philosophies, and personal beliefs around hope and religion. Some turn towards a god in this apocalypse; others turn away. And some try to take god’s place.  Although some might try to take control, believing they know best, the truth is, all in all, there is no right answer to dealing with loss and grief. There’s no one sobbing in the street and mourning the dead – since this is a massive, collective loss, the hundred or so left might remain in shock forever.

I found that the plot was predictable, BUT, it was the philosophies that kept me hooked. Yes, the ‘twist’ at the end (or big reveal) is evident from about half way through, but I didn’t mind that since the rest of the book was so beautiful. It was very odd that out of the survivors (A little over a hundred out of the billions the human race used to be made up of) the protagonist knew or was related to two of them. The coincidences did feel heavy handed.

The novel really did manage to speak about today, about how our fear of ‘others’ can destroy us all. We hear bits and pieces about the forced emigration when Earth became over crowded; about the protest ships; about the echelons that make up our future society, where our fingers are branded with our class. I would have loved to know more about that, even if that world is now gone.